Jilda's Ark: A voyage of discovery

Join local Tasmanian author, Verity Croker, as she talks about her most recent young adult novel, Jilda’s Ark and a cruise that sails you into adventure and danger. Another gem that draws on the Tasmanian landscape in its setting. 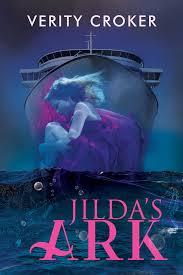 Jilda’s Ark is the second young adult novel I’ve had published with Harmony Ink Press, an American publisher based in Tallahassee Florida, that focuses on books with LBGT+ themes. The first one was May Day Mine, which is a fictional story based on the Beaconsfield Mine disaster.

I first discovered Harmony Ink Press through an advertisement in the Queensland Writers’ Centre magazine, and was delighted when they accepted my manuscript for May Day Mine. After my very pleasant experience working with Harmony Ink Press, I decided I would like them to consider publishing Jilda’s Ark too. Despite being based in the US, and all stages of the publishing process having to be negotiated and completed online, I don’t feel there is any real distance, though I would love to be able to pop into their office and meet them all face to face. They are very professional, respectful, friendly, and supportive, at every stage of the publishing journey, and allowed me a great deal of input into the design of the cover.

The original inspiration for the novel came when we were on a shore excursion on the island of Dominica during a Caribbean cruise, and were running late returning to the ship. I started to wonder what it would feel like to return to the pier to find your ship had departed without you. After that it was a series of What if? and What then?

Jilda’s Ark mainly takes place on a cruise ship. Jilda remains on board unwell as her mother and twin sister Rosa take part in an on-shore excursion. Jilda wakes to realise the ship has left port, having been taken over by an unknown group whose mission it is to rescue environmental refugees from the fictional islands of Levy Archipelago. During the voyage the crowded conditions become almost unbearable as disease breaks out, there are bouts of seasickness, and a still-born baby is buried at sea. Through all of these experiences, Jilda learns more about who she really is, and also begins to realise that although she has a boyfriend back home in Hobart, she is becoming attracted to Jade, another passenger. Her ship, and the fleet they are travelling with, finally arrives in Hobart. The Tasmanian government has to quickly deal with huge numbers of environmental refugees. Safely home, Jilda cannot settle as she recalls the stories about the animals the refugees had to leave behind on the islands. Concerned about their long-term fate, she, Jade and Rosa successfully crowd-fund a rescue mission to save the animals from drowning.
Jilda’s Ark deals with topical themes including climate change, sea level rise, and animal welfare. Setting part of the story in Hobart was a wonderful opportunity to pay homage to the beauty of the River Derwent and Hobart itself with its back-drop of kunanyi/Mount Wellington. The relationship between Jilda and Jade is at the heart of the story.

A little about Verity:
Verity Croker writes across a variety of genres. Her novels for young adult readers, May Day Mine and Jilda’s Ark are published by Harmony Ink Press, US, and her chapter books for 8 to 12 year olds, Cyclone Christmas and Block City, are published by Sunshine Books, NZ. She is also a published author of short stories, newspaper articles, poetry, and travel articles.