Discover IBBY – At Home and Abroad

Join Dr Robin Morrow AM as she shares a life-time passion and long-term commitment to The International Board on Books for Young People.

IBBY (The International Board on Books for Young People) was founded in 1953 by Jella Lepman, who believed that books could build bridges of understanding and peace after the destruction of World War II. IBBY now has 75 National Sections all over the world.

In some countries IBBY is the sole or major children’s literature organisation. Here in Australia, as the CBCA sponsors Children’s Book Week and the major awards, IBBY concentrates especially on international matters, showcasing Australian books to the world though activities such as nominating writers and illustrators for the Hans Christian Andersen Award, and selecting outstanding books as IBBY Honour Books. For the first time ever in Australia, you can see an exhibition of Honour Books from every IBBY country, together with all Australian Honour books since 1962 (the first one being Tangara by Tasmanian Nan Chauncy)—as an accompaniment to the CBCA conference in Canberra. For an annotated list see the IBBY Australia Honour Books List 1962-2018 (PDF).

IBBY works towards the right of every child to be a reader, a reader with access to books with high literary and artistic standards, including those in their own language. See what IBBY does worldwide at http://www.ibby.org/. The Children in Crisis Fund helps children affected by natural disasters, civil disorder or war, working to replace or create libraries/collections of appropriate children’s books and provide bibliography, the therapeutic use of books and storytelling. IBBY Australia has donated to this work, such as in Japan after the tsunami, in Gaza to rebuild destroyed libraries, and with Syrian refugee children in Lebanon. Such work reflects the basic tenets of Jella Lepman, and makes me proud to be a member of this worldwide body. And there are wonderful rewards through friendships forged through IBBY, especially if one attends an international Congress. The most recent was in Athens, and the next is to be held in Moscow in September 2020.

IBBY Australia, with national president Dr Robyn Sheahan-Bright and an executive committee including Nella Pickup of Tasmania, is in excellent hands. After ten years as president, I am happy to have moved to a different role, as a member of the international jury for the Hans Christian Andersen Award, sometimes referred to as ‘the little Nobel Prize’ as it is given to a writer and an illustrator for their lifetime work. Although I have served on many judging panels, including CBCA and Premier’s Award, this is a responsibility that can feel daunting . . . but as the first Australian judge since the 1980s when the late Dr Maurice Saxby served on the panel, I take courage from his example and like to think he is giving his posthumous blessing to the work.

In Tasmania, an International Children’s Book Day event will be held on 2nd April, the very day of Hans Christian Andersen’s birthday. I recommend that you attend if possible, learn more about IBBY, have a lot of fun and help raise money for the Children in Crisis Fund. 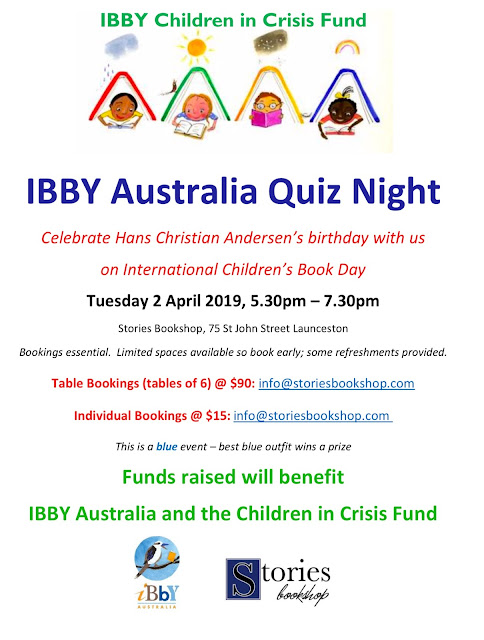 Editor's note: A quiz night! What a great way to show off your children's literature knowledge (or lack ;-(. Bookmark the date and book a place or table.

Tidy is a four-letter word

A timely follow on to last week’s post as Nella decides that following Marie Kondo’s advice to limit her book collection to the bare minimum does not suit her (and I think many readers) love of books. In response, Nella has identified some of the titles recently added to her To Be Read (TBR) pile and no doubt the best of these will remain firmly planted on her shelves.
I read and dismissed Marie Kondo’s comments on books over 3 years ago. I have more than 30 books by my bedside – not 30 in the entire house!  Now that she is a Netflix celebrity, her initial comments have drawn condemnation from book lovers all over the world, she has moderated and provided a context for her views.
Two reports for you to look at if you wish to investigate decluttering:
Marie Kondo to Bibliophiles: No, You Don’t Need to ThrowAway Your Books (Nguyen, 2019, January 16).
and now her change of tune….
Marie Kondo is proud of your tidying up, and wants toclarify that part about books (Villarreal, 2019, January 24)
Just as well Ms Kondo, as my 2019 TBR bedside pile will soon include these new Australian junior fiction titles.

Melody Trumpet by Gabrielle Tozer (Harper Collins) January
As the daughter of global music superstars, Melody Trumpet was supposed to be extraordinary - a melodic genius to carry on the Trumpet legacy. But, as was discovered when Melody screamed her first out-of-tune note as a baby, this wasn't to be…
Ms Tozer has written 3 YA novels; this is her first junior fiction title.

A fast-paced and poignant novel of survival by Justin D’Ath that draws on his own experience of escaping the 2009 Black Saturday bushfires.

The fourth title about Australia's favourite teacher. If you haven't met Mr Bambuckle find out about his adventures on Tim Harris' website.

Ella and her brother Emery are alone in a city that’s starving to death. If they are going to survive, they must get away, upcountry, to find Emery’s mum. But how can two kids travel such big distances across a dry, barren, and dangerous landscape?
If the previews are correct, this will be just as moving as her award-winning How to Bee.  (PS She has written a YA title In the dark spaces under the name Cally Black – a CBCA honour book.)

Scorch Dragons: Elementals #2 by Amie Kaufman (HarperCollins) March release of the sequel to Ice Wolves, an epic middle-grade fantasy series about a world where powerful magical shapeshifters are locked in a conflict that has spanned generations. 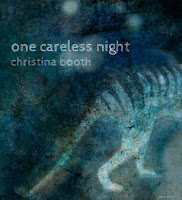 One Careless Night by Christina Booth (Walker Books) April
The hauntingly beautiful story of Australia's last thylacine (Tasmanian tiger).
FYI: There is a preview launch at the Tasmanian Museum and Art Gallery on February 17. You do need toprebook. Read about this on Christina’s news page at https://www.christinabooth.com/news.html and watch the breathtaking trailer.
Nella Pickup - reader

Some people don’t believe in goals, or resolutions, or To Do lists, or any number of organisational systems of day-to-day ambition. And that’s okay, of course, but it’s actually one of my favourite parts of each year to sit down on New Year’s Eve and discuss what I have planned for the months ahead. In the final hours of 2018, one answer was obvious: a return to reading. I had recently joined author John Green’s “Life’s Library” book club, and one member spoke in the online forums about committing to reading a book a week in the previous year, an aspiration he narrowly managed to achieve. I was inspired. As a newly minted teacher, I often tell my students—particularly those wanting to achieve in the realm of creative writing—that it is essential that they read, both for study and pleasure. Yet we, as their teachers, regularly bemoan the “lack of time” to read in our own lives, and build small piles like log stacks beside our beds, promising ourselves that Summer will see us conquer them, yet usually failing to do anything more than add height to this increasingly domineering health and safety hazard. It’s often a matter of do-as-I-say-not-as-I-do, and it has started to bother me.

The time, I realise, must be there—or at least it is for me. My paper lists of all that I read and watch on television are steadily growing, but the “watch” list (which includes full series and films) is progressing at a much faster rate than my reading one. Fiction and non-fiction are a delight when we can carve out a corner of the world and fall into them with full attention, but they are not typically the “bite-size” chunks that we find so easy and engrossing in newspapers, the internet, and on social media. I suspect that part of the challenge is sustaining focus. Marie Kondo, the author of The Life Changing Magic of Tidying, and the star of the new Netflix sensation Tidying Up caused a small riot on the internet when she suggested that the average person should have approximately thirty books on their bookshelf. Of course, the furor was misguided—Kondo’s fundamental principle is to keep only objects that “spark joy” when you hold them, and that could be any number of books. Perhaps more interestingly, I think we can apply this principle to our time as well—I found myself considering the fact that reading definitely sparks joy for me, while other pursuits (such as mindlessly browsing the internet) could provide the space in my schedule for the quiet imaginative reflection I crave.

I say all of this because I know that I am not alone. A Google search for “I don’t have time to read” garners six billion results. So I’d love to talk to all of you about this very modern conundrum. Specifically: what are your reading habits? Do you explicitly make time for reading, or simply take it as it comes? What encourages and inspires you to read? Do you have tips and tricks for making reading a daily habit, and how many books do you hope to read in 2019? Share with me in the comments below, and hopefully we can inspire each other. I hope that 2019 is a wonderful year for you, full of hot tea, soft armchairs, gentle light, and stories that spark the most potent joy imaginable.

Happy New Year, and happy reading.
Lyndon Riggall is a writer and new English teacher who has just begun his first year in the classroom at Launceston College. You can find him at http://www.lyndonriggall.com and on Twitter @lyndonriggall.