Coral Tulloch, watercolour illustrator of ‘Phasmid: Saving the Lord Howe Island Stick Insect’ takes CBCA Tas readers behind the scenes of this book on the phasmids, who were thought to be extinct for 80 year,s and their rediscovery on a volcanic outcrop, 23 kilometres off the coast of Lord Howe Island. Will they make it back home? Read on …

Sometimes something comes out of the blue, and that’s exactly how this book came to me. Rohan Cleave, an invertebrate zookeeper at the Melbourne Zoo, approached my booking agent with a story idea he wished me to see.

There was just something about Rohan, his dedication and passion for his subject and his enthusiasm to tell its story that intrigued me. I wanted to help Rohan and suggested several things, including a publisher. I had always been really impressed with the publications from the CSIRO, and because of Rohan’s work, I thought the two would suit each other beautifully.

The only problem was that the CSIRO had not yet produced children’s books for trade. This manuscript came to them at exactly the right time and they offered Rohan the publication. I was thrilled for him and as the project progressed, I continued to help both he and Briana Melideo, the publisher and editor, with ideas I had for the publication.

But my main stance, from the very beginning, was that although I was ready to offer support and help, I felt I was not the right illustrator for this book despite Rohan’s insistence to the contrary. As time went on, I suggested several illustrators but Rohan kept holding out. Eventually I thought I would have a go at some rough illustrations.

A while later, during a meeting with Briana and Rohan at the Melbourne Zoo where we also met our subjects, Rohan mentioned their common family name – ‘Phasmid’, and the book commenced.  Great title!

This amazing creature has been bought back from extinction through the efforts of scientists and the breeding program developed by the Melbourne Zoo. Initially the rescuers slept at the zoo with their two breeding Phasmids, Adam and Eve, and noted everything they could observe about this creature. No one had ever noted their habits, their lives before, so everything was new and experimental and so very important.

On September 7th, 2003 (Threatened Species Day), Eve’s first nymph hatched and was named Yarra. Since then over 12,000 nymphs have hatched and the survival of a species, once thought extinct, is now a certainty.

This book is a lyric story of the Phasmid and has a great information section on the facts behind its survival. It was decided to delay the launch of the book until Threatened Species Day this year for a double celebration of the book and the anniversary of the first nymphs’ hatching.

Melbourne Zoo was wonderful and closed the Butterfly House for the morning of the book launch where thousands of butterflies landed on all who attended.

It has been such a joy working with Rohan and watching his discovery of the process of storytelling that brought his book to life. It has been an extraordinary delight and privilege for Rohan and I to work with the CSIRO.  Briana is an incredible editor and I wish her all the very best for all their new titles.

For now the Phasmids live behind the butterfly house at the Melbourne zoo and hopefully one day soon they will return to their beautiful home on Lord Howe Island.
Posted by CBCA Tasmania at 21:58 1 comment: 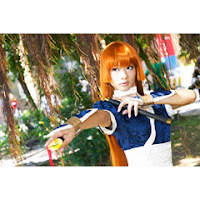 Late last year I was initiated into the world of Cosplay when my daughter and her friends announced their intention to attend a convention in Hobart. I had absolutely no idea as to what Cosplay involved and what to expect from a group of people gathering together dressed as fictional characters. To say the least I was amazed and impressed with the creativity, enthusiasm and ability of a love of fictional characters from literature and other media formats to unite people from different backgrounds and age groups. 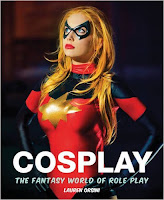 To be surrounded by Gandalf, Jedis, Ariel the Mermaid, Pokemon, Hobbits, Dorothy from the Wizard of Oz, and a range of Manga inspired characters was a wonderful experience and I would highly recommend attending conventions in the future. To see young children, young adults and much older people dressed up and having fun in a literature inspired environment was fascinating. It was a bit like a Book Week parade but for all age groups.
If you are still unsure as to what Cosplay is about, a great article to read is ‘A Beginner’s Guide to Cosplay’ by Lucy Saxon. http://www.theguardian.com/childrens-books-site/2015/jun/26/cosplay-a-beginners-guide-comic-con-lucy-saxon

The popularity of Cosplay amongst young people is growing and I am sure in many schools there is a small band that do so and would love to share their enthusiasm with you.

Source references for images: http://free-images.gatag.net/en/  authorised for use under Creative Commons
Posted by CBCA Tasmania at 06:52 No comments:

‘UNDERNEATH A COW’ – LAUNCH by Carol Ann Martin

Madge the cow, heroine of my new picture book, is a country girl through and through. It therefore seemed fitting that Underneath a Cow should have a good old country-style launch. 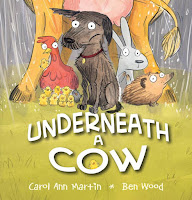 Sunday, August 23rd was a chilly afternoon in Cygnet, but inside the Southern Swan Bookshop all was snug and bright. A log fire, silver teapots, fine china and cake-stands laden with slices, cupcakes and scones created just the right kind of winter cosiness for enjoying some book talk and story-telling. There were, of course, plenty of mums, dads, grandparents, aunties and friends there to check out Madge and hopefully buy the book. But the special guests were fans who ranged in age from two years to ten – and they were there to have fun.

Bruny Island children’s author Anne Morgan and CBCA Tasmania committee member Jessie Mahjouri had gone full out with ideas and skills to make it a thoroughly entertaining afternoon, featuring craft, colouring in, wonderful masks of characters from the book, a treasure hunt and, of course, a reading of the story. Local musicians Paul Martin, Malcolm Martin and Brad Madigan played some lively jazz for a singalong, and especially for the Underneath a Cow Song which is a highlight of the book.

Underneath a Cow is the story of the Great Big Terrible Awful Storm that creeps up one afternoon and catches quite a few small creatures literally on the hop and in need of shelter. Fortunately, dear, kind, caring Madge is there in the middle of the field and she is able to gather Lally rabbit, Robinson the dog, momma Cackalina and her chicks, plus a very slow echidna named Spike, safely underneath her ample tum. When the storm breaks, it is a scary experience indeed, but Madge is a brave cow as well as everything else and her advice is to “Sing dears! Sing for all you are worth!” 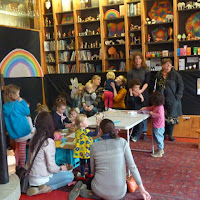 The song does the trick and the storm abates. One by one the animals leave the shelter of their friendly cow and make their way home. Spike mutters that it is just as well that they were in a safe place, leaving Madge to muse that as well as being in a safe place, sometimes we have to be a safe place.

Several reviewers have picked up on the shelter and safety aspect of the story and have pointed out that this is a good topic for discussion with young children.

Of course, the hilarious and heart-warming pictures by New South Wales illustrator Ben Wood are the perfect complement to Madge’s story and I couldn’t be more grateful to Ben for capturing the whole feel of the book so imaginatively.

Madge and I will be guests at Fullers Bookshop in Hobart, 11am on Sunday, 18th October and would love to meet anyone who can come along. You can also meet me on my blog site Carol Ann Martin Writing for Children, http://carolannmartin.blogspot.com.au/

Posted by CBCA Tasmania at 00:59 No comments:

Author Johanna Baker-Dowdell shares her own love of story characters and how this has been translated into an engaging and memorable classroom activity. Lucky students!

Some of the characters I discover in the books I read stay with me for years because they have been written in such a way that captivates me.

Great characters have me holding my breath as they take on a challenge, cheering when they succeed and crying with them when things don’t go to plan. Favourite characters from my childhood reading include The Velveteen Rabbit, Wilbur, Charlotte and Fern from Charlotte’s Web and anyone created by Roald Dahl.

Following on from my previous post about storytelling with preps, I wanted to share a characterisation session I put together for my son Noah’s Grade 3 class.

Reading did not come naturally to Noah at first, but he always loved books and the stories they contained, so I knew he would find his own way of deciphering the words eventually. With some help from his school’s literacy teacher and reading at home, between us we fostered a love of reading that I’m sure will last Noah’s lifetime.

In the past year Noah has devoured most of J. K. Rowling’s Harry Potter books, all of Andy Griffiths’ Treehouse series and several graphic novels, but one book that completely captured his imagination was the first from A. L. Tait’s MapmakerChronicles.

Earlier on this year I had discussed the possibility of speaking to Noah’s class about writing with his teacher and she suggested we talk about characterisation. Since Noah had enjoyed Race To the End of the World and the main character, Quinn, was a similar age to the class, I thought he was the perfect character for us to discuss.


To get them into the mood for our characterisation chat we discussed the front cover of the book and I read the Prologue from Race To the End of the World to the class. I spoke about the ways an author develops a character, including writing about their appearance, how they are feeling, what they are thinking and the words they use when speaking. Next, I gave the class a page filled with quotes from that passage (see below) and we discussed what we could tell about Quinn’s character from the actions and words.

The class consensus was that Quinn is smart and clever, has a good memory, is hiding a secret, gets scared and nervous and has a special skill that not many others share. After talking about Quinn’s traits I asked the class to draw a picture of our leading character, which resulted in some intriguing interpretations (one Quinn was a vampire), and was a fun way to wind the session down at the end of the day.

When Noah and I walked home from school that day he told me his friends were excited about the characters they could create in their own narrative storytelling and they wanted to read the Mapmaker Chronicles too. Anything that inspires children to read and write stories is a great thing in my book.

Johanna is a freelance journalist and author of the book Business & Baby on Board.

Posted by CBCA Tasmania at 16:19 No comments: