New book reviews and a peek at a personal book collection

This week Janet shares some of her favourite recent releases and also treats us with a glimpse of her personal book collection of Noah’s Ark Books – Wow! What an amazing array of beautiful and historic books she has gathered together.
I have some reviews and then a few books from one of my collections. Who doesn’t know the feeling that grips you when you see the right book? Not “I want”, but  “I must have”. That’s how collecting is – a visceral need to own that book. Not to complete the collection – it’s never complete – but to join the other books that have chosen to come home with you.
Reviews 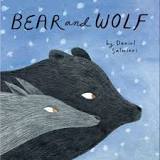 Bear and Wolf, Daniel Salmieri, Enchanted Lion Books, 9781592702381, $30
This gentle lyrical picture book has soft illustrations in shades of rose, white and violet which imbue the whole with a sense of peace. We’re shown the quiet progress of a walk in friendship through the winter landscape, then the re-awakening of the pleasure of that friendship against the resurgence of life in spring. A beautiful book to treasure and share.
All ages.

Malamander, Thomas Taylor, Walker Books, 9781406389920, $17.99, May
“My name ‘s Herbert Lemon by the way. But most people call me Herbie. I’m the Lost-and-Founder at the Grand Nautilus Hotel, as you can see by my cap.“ Thus begins a chilling, mysterious adventure in Eerie –On –Sea. Missing parents, courageous children, the frightening Boathook Man, and a terrifying sea monster, the malamander – all the elements needed for a satisfyingly scary novelAges 9+

How it Feels to Float, Helena Fox, Pan Macmillan Australia, 9781760783303, $17.99, May
This is a moving story of a teenager grappling with mental illness; Biz’s dad is with her, telling her things about her past – but he is dead, no-one else can see him, and she can’t tell anyone else her dark thoughts. She drops out of school, and is almost ready to float away herself, but the anchor of friends and family draw her back. This debut novel  is moving and sad, yet also life-affirming.Ages 14+

A Velocity of Being: Letters to a Young Reader, edited Maria Popova and Claudia Bedrick, Enchanted Lion Books, 9781592702282, $45
Including such luminaries as Neil Gaiman, Alain de Botton, Jane Goodall and Ursula Le Guin, this will to add depth to any school library - to dip into at class reading time, to browse through by yourself in a quiet moment. There are 256 entries from scientists, artists, philosophers, reflecting on the joy of reading and what it means to them, each with a facing illustration by a different artist  - including William Grill, Sean Tan, Mo Willems and Jon Klassen – that illuminate and add resonance the text.All ages
Janet’s Noah’s Ark Collection
I love and collect picture books, but it wasn’t until I had a Noah’s Ark book that I began to consider the joy of having many books on one subject - the diversity of illustrations brings such pleasure, and a sense of wonder that one idea can be presented in so many different ways, as this epic story has been for   hundreds of years.

The first one I acquired was The Ark Book, Freda Derrick, 1920. I saw in it a secondhand shop in Cecil Court, London, and immediately needed it. But it was expensive, we were trying to stay within our holiday budget, and I resisted. Fast forward to 25th December, and there it was in my Christmas stocking. The beginning! This is a wonderful and amusing telling of the story; illustrations are naively charming, in bright colours, with some hilarious conversation bubbles from the animals. A highlight is the page showing the animals with Noah and family as they “jazzed up and down the Ark” to celebrate the rain stopping. “And if you don’t know what “Jazzing” is, ask anyone who remembers Armistice Night.” 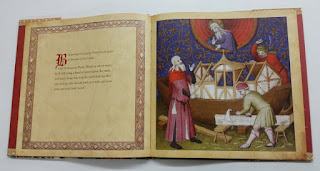 Noah’s Ark, Metropolitan Museum of Art, 2015
This beautiful version, true to biblical language, has full page illustrations from, amongst others, a seventeenth century bible, an English tapestry, Courbet and Chagall. Sumptuous and splendid, irresistible.  The last pages have information on each illustration, and you can be delighted anew at the variety of styles that depict one story.

Noah And The Ark, Harold Jones and Kathleen Lines, 1961 is, by contrast, a quieter presentation, with blue washed illustrations reminiscent of Edward Ardizzone’s. It’s told in simple language, every page has a picture that is a pleasing addition to the text, with the cheerful, often smiling animals adding a touch of whimsy. 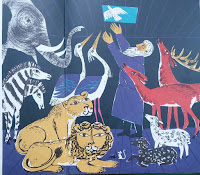 Noah’s Ark, Reinhard Herrmann illustrator, 1959This has the traditional text. Herrmann’s distinctive use of  flat bright colours will please those of us who enjoy a nostalgic look at picture books of the 1950s.

L’Arca di Noe, Andre Helle, this edition 1991.
Originally published in French in 1925,  I acquired this reprint in Italy. It’s a large hardback, but I had to make room in the suitcase for such a find. Illustrated in art deco style, in  colour,  and with other black text pictures, it has  information about the  animals – both  familiar and exotic -  written by Helle – that renders them alive and loveable.

The Puffin Noah’s Ark, John Miles, 1958
I don’t own this, but I really need it. Please help! Actually I need two copies – one for the Noah’s Ark collection, another to add to my set of old Picture Puffins – but that’s another story…
Janet