A fitting wrap up for our 2019 blog offerings, Janet Grecian provides another window into her amazing book collection with a selection of Christmas stories – historical, current and the times in between. There are sure to be some nostalgic reactions (I loved Pookie) as well as some book shop searching to find a special title after reading this post.
In the 1950s, school awards and Sunday School prizes were nearly always books about Christmas, so from an early age I was interested in the various ways of telling the same story, and in different illustration styles, and this was bound up in the absolute joy of Christmas – family, school holidays, and the delights of rampaging round the streets of Queenstown with friends as the adults rested after the excesses of dinner. Then the reading of the new books in the days that followed.
I have about 500 Christmas books – I do cull, I promise, and I am quite discerning when it comes to new acquisitions – but it now seems that all those I already have are destined to be kept.
The Littlest Angel was the first book that made me cry, at age five (to be followed of course by tears shed over Black Beauty and Seven Little Australians), so the story has always stayed with me, as have the other Christmas books from childhood. They’re not great works of literature or art, but 60 years later, they still matter. 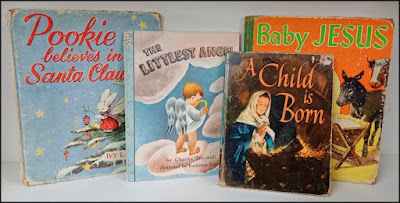 Published earlier than these is Tolkien’s Letters from Father Christmas. I came to this later, but it has become a favourite, and every home should have one. It’s a series of beautifully illustrated letters that Tolkien, in the voice of Father Christmas, wrote to his children between 1920 and 1942. The letters relate in a light-hearted fashion the adventures of Father Christmas and the Polar Bear, and gradually more characters are added; the tone becomes serious as Europe approaches the war years. There is a new edition coming this year: 9780008327729 Deluxe Slipcase Edition ($130), or, for the less ambitious, 9780618512652 is $35.

There are subsets in my collection: versions of The Night Before Christmas, versions of The Twelve Days of Christmas, versions of Dickens’ A Christmas Carol, books of carols, versions of The Nutcracker Suite, Golden Books (nostalgic pleasure), pop-up books, and different editions of the same title. I have classics – The Jolly Christmas Postman, Bruna’s The Christmas Book, The Polar Express, Raymond Briggs’ Father Christmas books – and more recent titles, modern classics, that I adore.
Harvey Slumfenburger’s Christmas Present (1993) by the inimitable John Burningham, is one of these modern classics. Father Christmas has just one more gift left to deliver, and he must make every effort to reach the top of far, far away Roly Poly Mountain to get it to Harvey Slumfenburger. This endearing, wonderful story warms the heart of all readers; Father Christmas is helped by a series of passers-by, via many modes of transport (plane, motorbike, jeep, skis) to make sure Harvey Slumfenburger receives his present. The illustrations are beautiful paintings of the winter landscape, with the people and animals drawn in Burningham’s whimsical, charming style.

Robert Sabuda’s The Christmas Story (2016), 9780763683269 ($70), is a masterpiece of paper engineering; six scenes of white sculptures, with some gold highlights, tell the story of the Nativity. The technical expertise of this book is breathtaking, and the accompanying text perfectly integrates the traditional story into the glorious illustrations.
The Christmas Story by Rober Sabuda (Candlewick Press, 2016)
Olive the Other Reindeer (1997), 9780811818070 ($30), by Otto Seibold and Vivian Walsh, is for the reader who enjoys a play on words. My version came with the soft toy of Olive, a dog who hears the line of a carol, “All of the other reindeer” as “Olive, the other reindeer” and promptly sets off to the North Pole to join Santa and the reindeer delivering gifts around the world. Her dog/reindeer skills come in handy and this hilarious adventure ends back at the North Pole, with Olive, wearing her own set of antlers, outside playing games with the other reindeer.
The reader of How Many Miles to Bethlehem? (2004, by Kevin Crossley-Holland and Peter Malone) is addressed in turn by the characters of the Nativity –­ Mary, the innkeeper, the animals in the stable, the shepherds, the wise men, Herod, and the angels – and the unfolding story is beautifully illustrated, from the glowing endpapers to the blue-green sphere of our earth on the final page.
A recent release that I’ve added to my collection is The Night Before Christmas 9781925870848 ($25). This new edition of the 1954 version of the Clement Moore story reproduces Caldecott Medal winner Roger Duvoisin’s original illustrations, and is an ideal read-aloud for families on the 24th December. Moore’s text is perfectly enhanced by the limited-palette pictures, and the long narrow shape of the book. Readers may remember Duvoisin’s other illustrations in The Happy Lion, and his series about Petunia the silly goose; of course, Petunia’s Christmas is also in my collection. 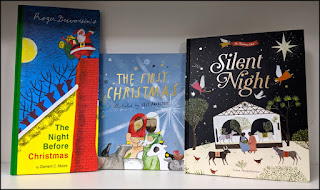 Another recent acquisition is Silent Night, 9781786030665 ($23), illustrated by Lara Hawthorne. The words of the carol, universally known and loved, are complemented by Hawthorne’s exquisite pictures, with their use of matte colours against the details of the starry night. Hawthorne also illustrated Carol Ann Duffy’s The King of Christmas.
The First Christmas, 9780143796909 ($25), by Jess Racklyeft, is another book that captures for small children (and devoted adult collectors) the wonder of the Nativity. The spare, handwritten text and simple illustrations combine to depict an occasion of joy, celebration, gift-giving, and togetherness.
Perfect Christmas!
Janet Grecian
The Hobart Bookshop
FB: https://www.facebook.com/HobartBookshop/
T: @HobartBookshop 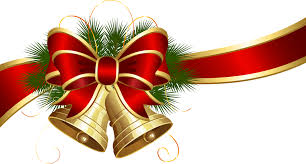 Editor’s note: Many thanks Janet for sharing this wonderful snapshot of your Christmas book collection. If readers have a special title that they would like to share add a comment and let us know. The CBCA Tas committee, members, and the wider children’s book lover community, are most appreciative of Janet’s posts over time and the windows into books that she has provided. Revisit her Noah’s Ark collection just for the joy of it.
Merry Christmas everyone and have a wonderful summer reading – why not share some of those YA and children’s titles in a blog post for 2020 – email to tas@cbca.org.au for consideration.


As the school year draws to a close, Tasmanian illustrator, Coral Tulloch, highlights the value of the current CBCA Tasmania Authors and Illustrators in Schools Program and how this has helped expose Tasmanian schools to local talent rather than relying on visiting authors from further afield to enrich children’s reading experiences. Coral also provides some thoughtful ideas to maximise the success of author and illustrator visits. Find out more about her work in this CSIRO article on Coral’s contributions to scientific literary non-fiction.

I’d like to sincerely thank the CBCA Tasmanian Branch for their initiation in providing the visits to schools of Tasmanian Authors and Illustrators. I am certainly not trying to speak for everyone, just for myself, but I do feel from experience over the years that too often we are viewed as not being as important, exciting, or perhaps exotic enough as we live here, so anyone, from somewhere else holds so much more charisma and interest. I am told this by my peers who live on the mainland and who never get asked to come to their local school, too many times, so perhaps it’s not just Tasmania.

But the ability to be able to visit schools within our own state has a certain beauty, a real attachment for our creative place and to inspire students and teachers here. For me, the most valuable visits from the CBCA Tasmania grant is that small schools, small communities could benefit from having creators come to visit, something that they said is so often not viable for them. This was the greatest gift, to be able to spend time in a school community, work with them, leave material with them for future use and to hopefully be useful for the teachers to take ideas and hopefully inspire further written and visual narratives in all of their work.

It is all fine to organise a large auditorium and give a presentation, as worthy and as important, fun and inspiring as it might be, but it is really a show and tell and all too often a school may try and cram every student into a presentation. This is not only difficult for the students, but also for the presenters, as the language, the presentation itself should be tailored for the audience to achieve the best possible, and this is curtailed by the idea of a whole school presentation.

When visiting smaller schools, or where the schools literally looked at the presenters they wanted, and gave time to the grades that would benefit, (not try and get every student to see the visiting author and illustrator) are the ones that are really, really valuable. We all produce variable work and have varying expertise with varying presentations and workshops, so the ability to be able to contact the school first and to work out what would be best, suit their needs etc, was a terrific way to proceed.

Again, thank you to the CBCA Tasmanian Branch for this initiative…and I hope, that if this happens again, more smaller schools will take part and consider the great value of having a creator work with their school community for the day, for both their students and their teachers.

From the editor: CBCA Tasmania blog readers have been treated this year with posts from children’s book creators that have participated in the program in 2019. Revisit posts from Christina Booth and Julie Hunt & Dale Newman. Consider also Why You ShouldMeet Your Heroes. Hopefully, as the program continues into 2020 some of the recipient schools will also share their experiences for our blog audience. Contact tas@cbca.org.au for more information about participating in the program.