I read last week's excellent blog entry on the importance of leading kids from movies back to books just as I was planning a night at the movies and considering viewing the film Saving Mr Banks, which purports to reveal the background to the making of the 1964 Disney musical version of the 1934 children's novel Mary Poppins. I then wondered if many children ever bothered turning back to the book after viewing the Disney musical.


Without the movie, the songs, and Julie Andrews, would the book even still be in print?


I thought that before I passed judgement I should read it, so I downloaded a copy. No, there was no well thumbed childhood copy sitting on my bookshelf, in fact I confess I didn't even know the movie was based on a novel, let alone the first of a series of eight written by an Australian, until I studied children's literature in 1979! However I did really enjoy the musical, particularly as it was a favourite of my young daughter in the early 1980s and my grandson in the mid 2000s. So the movie might have ongoing appeal, but how does the novel stack up in 2014? Is it still worth the effort, if it ever was?


Well, surprisingly, I enjoyed it! In the book I found a very different Mary from the musical - a Mary Poppins who is often severe, sarcastic, vain and egotistical, who doesn't sing and who never says supercalifragilisticexpialidocious, yet is still endearing, generous, well loved by the children in her care, and delightfully enables them see and experience magic in their lives. The magical fantasy elements of the story are reminiscent of Enid Blyton's Wishing Tree series; the characters are simple, engaging but also occasionally a bit weird and creepy. However, I think the jury is out on whether the novel deserves its classic status.


So will I now see the new movie? I don't think so, having read that the script lacks historical accuracy. And having researched a little of P. L. Travers’ life, I think now that hers is the really fascinating story. It seems she lived a complex, dark, and, in part at least, sadly damaged life of subterfuge, so I think that an honest movie based on her real life would be much more compelling than the Disney version!


Jessie Mahjouri
Posted by CBCA Tasmania at 21:21 No comments:

Reeling them in: using film to encourage reluctant readers and extend readers

Harry tried. And tried. He had no idea what Mr Ollivander was waiting for.  The pile of tried wands was mounting higher and higher on the spindly chair, but the more wands Mr Ollivander pulled from the shelves, the happier he seemed to become.
‘Tricky customer, eh?  Not to worry, we’ll find the perfect match here somewhere...’
(Rowling, J.K.,  Harry Potter and the Philosopher’s Stone)


Working in a school library I often like to imagine myself as an Ollivander of the library.   Helping children select a book is often hit or miss and may take quite a while, but when it is right it is magical.


At this time of year all the big movies are being released as well as holiday television specials, and many provide a wonderful opportunity to highlight to students that they started as, believe it or not, a book!


Students are often surprised to discover that their favourite movie is not only in the written form (e.g. Diary of a Wimpy Kid, The Hobbit,  Narnia,  Charlotte’s Web, The Book Thief) but that the story may also continue in sequels or series; or that the author who inspired the film has written other books.  Movies can also be used to encourage students to read the Classics (e.g. The Secret Garden, Little Women, Peter Pan) or revisit fairy tales, many of which have been made into animations.


Students often get very excited about a book because of the controversy prior to a movie’s release or after seeing the movie.  A recent example is The Hunger Games trilogy.  The first movie generated a huge amount of interest and not always at the appropriate age level and this is where matching a suitable book to a child is important.


A successful activity I have undertaken with students of differing ages is to seek their suggestions of books (novels or picture books) that should be made into movies or animations, as well as the actors/actresses to play or voice the lead characters.  Students can then design the billboard or create a digital preview promoting their upcoming movie.


Using the excitement and enjoyment of movies to direct children towards books may provide that Ollivander moment – a challenging and at times frustrating process, but ultimately rewarding.


Tricia Scott
Posted by CBCA Tasmania at 12:20 No comments: 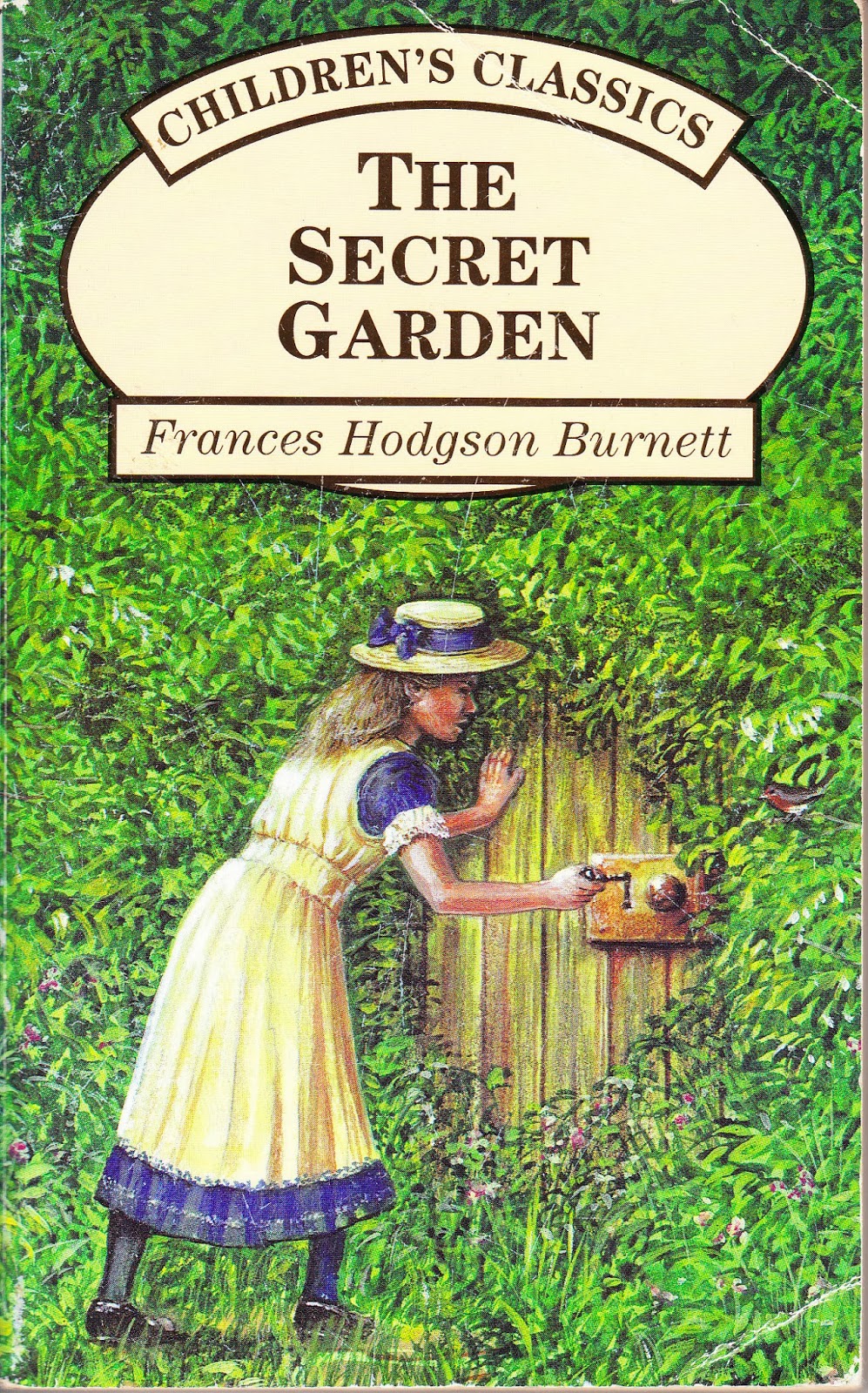 It has taken a very long time, but finally I have read Frances Hodgson Burnett's classic children's book, The Secret Garden. And what a lovely story!

Although the book was first released in 1910, themes of separation, loneliness and the search for acceptance are all too familiar in this day and age. Mary, Colin and Dickon are a delightful mix of complex children and I was thrilled with the happy ending.

But it wasn't the themes or the characters that initially begged me to read the book. It is simply that the title includes the word 'secret'; and this cover shows a girl turning the key in an enormous lock attached to a door almost completely obscured by vines.

This evoked images of Alice in Alice's Adventures in Wonderland, Lucy in The Lion, The Witch and the Wardrobe, Hugo in The Invention of Hugo Cabret, and of course Harry Potter. All of these characters have a secret place that is accessed by a hidden door. And this literary premise has been around for an incredibly long time.

So what is it that has always, and still fascinates readers about secret places, and keeps authors writing about them?

Do we all secretly harbour a desire to escape from our everyday lives and disappear for a while? Do other worlds, vastly different to our own, sound appealing? Is natural curiosity something we just never grow out of? Perhaps we need to read these types of stories to reinvigorate our own imaginations...

Or, maybe we just like a darn good read.

Posted by CBCA Tasmania at 14:37 No comments:

Petrel never tired of watching ice caves. Some of them were so blue and so beautiful that they made her heart ache....That’s when she saw him. A boy, laid out on the ice like a dead fish, with a scattering of snow almost covering his face. A boy, where there should have been nothing but the memory of winter. A frozen boy.
Not since I read Obernewtyn trapped in a tent in rainy Yamba in 1988, have I been so entranced by a fantasy novel. From the very first page of Ice Breaker, Book One in the Hidden Series, Lian Tanner transports us utterly to a crystalline, arctic environment. We shiver as we read and reach for warming things; including the warm touch of kind and friendly people. Twelve year old Petrel, the outcast, is a sterling hero with a strong moral compass. She is indefatigable in the face of an exhausting sequence of pressing dangers aboard the Oyster, an ancient icebreaker that has been wandering the seas for three hundred years, remaining loyal to her few friends and insightful about her many enemies.
When the boy is rescued from a passing iceberg, the long held secrets of the Oyster begin to reveal themselves. The boy, christened Fin by Petrel, has to make choices – will he fulfil the deadly mission assigned to him by the Devouts, or will he join his new friends and the now-awake Sleeping Captain and embark on a quest that could save the world?
The Big Questions – What does it mean to be human? Do we dare to care for and connect with others? What will the price of betrayal be? What is true and worth fighting for? – provide philosophical depth to a startlingly intelligent novel. But, these layers of politics and philosophy are skilfully interwoven with rich, complex characterisation and a dramatic plot that drives forward with relentless momentum. The crisp, spare, yet poetic prose quite takes our breath away.
Ice Breaker echoes themes of dystopian fiction with its anti-technocratic stance, warring factions, petty enmities and ruthless egocentricity; a canvas against which desperate events are projected as the protagonists struggle for survival.
The child’s face was beaten silver. His mind held the knowledge of ten thousand libraries....So far, every moment of his short life had been spent hiding from the Anti-Machinists.
The age old issues the novel raises are particularly pertinent in a contemporary Australia where compassion seems thin on the ground, philistinism, xenophobia and self-interested scepticism rule the day, and a sense of human decency and care for the planet are at serious risk.
This is a novel I would love to explore with capable readers from 11 -14; a novel I would love to push gently into willing hands. It is a novel perfectly suited to the Australian Curriculum: English, which itself is currently in jeopardy of being dumbed down by reductionist forces.
These views remain those of the blog contributor & do not necessarily reflect those of CBCA.


Jenni Connor
Posted by CBCA Tasmania at 17:38 No comments: