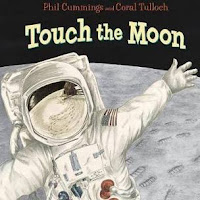 A momentous anniversary is celebrated through children’s literature. Coral Tulloch, illustrator of Touch the Moon, shares personal insights on the event and the crafting of this special picture book. Wonderful collaborations with Phil Cummings and others are brought to life in this week’s post.

The Moon has held fascination for every civilisation, with tales, fables, religious rites and science fiction…our dreaming of the moon has been constant in our lives. Fifty years ago this month the dream of humans reaching the moon and walking on its surface became a reality.

I was at my first year in high school and like so many people that can remember this extraordinary event, we all have vivid recollections of what we were doing, how we saw man take the first step on the moon. I watched it at school, and we watched, for what seemed like hours, the crackling black and white images of the ladder from the landing craft, eating, waiting for Neil Armstrong to take his first step on the moon.

Allen & Unwin approached me to illustrate Phil Cummings' own personal story of that day. For him it was a day that not only was spent in anticipation of the moon landing, but outside his window the sky deepened and snow began to fall, changing his world into one that was as alien and foreign as the images he was seeing with his nose pressed up to the black and white tv set. I loved his story, and Phil, (also an accomplished musician) has written music to commemorate this day, which the Adelaide Symphony Orchestra are playing at an occasion in September.

As it was such a personal story, I asked Phil if he had any photographs of his home from this time, so that I could use some real moments of his life in the book. If anyone remembers photographs from that time, they were always a little fuzzy (bit like the tv images) and yellowed by time. And there were only two photos…but I was able to place in some furniture and his mum’s skirt and most importantly, their beloved dog, Tiny.

At the same time that I was working on Touch the Moon, Mark Greenwood and Terry Denton were working on a very different tale of that day. Their book, Moonwalkers is a wonderful tale of a child’s experience of this event and also is layered with information and diagrammatic illustrations, along with the background of it being set near The Dish. Our books were published a day apart and Mark was visiting Hobart when we turned over the books and looked at their covers…we promise - Terry and I did not conspire to create a similar approach! 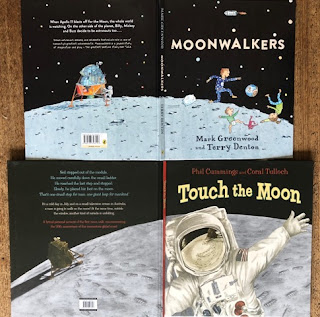 On Sunday, July 21st, at The Books Illustrated stand at the Victorian Markets, Melbourne, Terry and I were signing books in celebration of the event. It was a wonderful day and Ann James had dressed up the stand with loads of moon paraphernalia, some that she had taken from that actual day, newspapers etc. There were balloons, posters and a big party atmosphere…and many other authors and illustrators dropped by for the day to say hello.


Apart from catching up with friends, we all had such celebration and memories and tales from the day man walked on the moon and what this has meant.

The landing of a man on the moon changed our world in so many ways and changed our perceptions of our future for not only our life on Earth but also our life in the universe. The Apollo missions gave us the first pictures of the Earth from space and showed us how precious our beautiful blue planet is in a sea of dark space. The humbling photograph of Earthrise is one that also began a new consciousness for our planet, humbling and truly beautiful.

Editor’s note: Like many other readers, Coral’s recollections resonated strongly – high school, one television set per year group, seven Year 7 classes crammed into one room to watch this amazing event unfold in black and white. Students were also allowed to stay home for the day to watch if we had a home TV - not many of us did back then!

The word and the image: Lyndon Riggall offers some thoughts on picture books

Lyndon explores his strong engagement with picture books and some inspirational works that feed his love of this art form.

I can’t escape picture books at the moment. I find that my life goes in cycles when it comes to writing—always a novel ticking away, but also poetry, theatre, comics and other things, depending on what mood has taken me or what supportive community of collaborators has stepped forward in a given moment. Recently, I have been working with Launceston artist Graeme Whittle on a picture book about a retired greyhound called Becoming Ellie. The process has been a strange chaos of words and images for the past few months, but it feels like the pieces are falling into place. Picture books are on my mind. 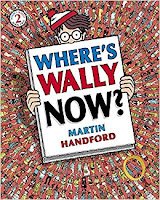 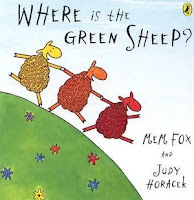 Of course, a great picture book is not simply an illustrated story: it is a story in two parts, where visual representations add detail and expand the narrative and its mystery. I love watching children looking intently at one of Martin Handford’s Where’s Wally? books for this very reason, as they learn the simple but essential message that art holds secrets. In terms of how long it takes to write a picture book, the jury is out. My own journey with Graeme has taken a few months of back-and-forth and continues, while Mem Fox states that even a 190 word text like Where is the Green Sheep? can take her eighteen months to a year to get right. Meanwhile, in a move that Fox would no doubt find savagely ambitious, this week also brought me the discovery of Matt Zurbo’s Cielo project, in which the Tasmanian writer is composing 365 stories for his daughter in a year (https://cielo365stories.com/), all while working his day job on an oyster farm at Eaglehawk Neck. The stories are all available for free online, and I’ve got to say that some of them are infuriatingly good. 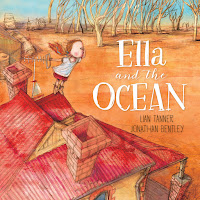 In a couple of weeks, on Sunday August 4th, I will be heading to Hobart to launch Lian Tanner’s delightful new picture book, Ella and the Ocean. A copy arrived at my house last week, neatly wrapped in bubble wrap, gorgeously illustrated by Jonathan Bentley. It reminded me again that a picture book is an artistic object as much as anything else: when done right, beautiful and special (and doubly so when you get to read it before other people). This is Tanner’s first picture book after a great career of writing, and when I told her how much I adored it she replied: “It feels like my first book all over again.” 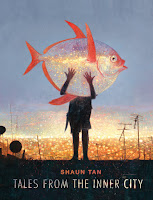 And it is that feeling that I feel that picture books still capture for us. So much of so-called “adulthood” centres around the putting away of childish things, but I don’t see a spectacular picture book as any less worthy to sit on a coffee table and be admired and pored over briefly in quiet moments. A Christmas present received from a close friend who knows me too well, Shaun Tan’s Tales of the Inner City, is the only book that has reduced me to tears in 2019, and a large part of its success in doing so was a heartbreaking companionship of text and image. Picture books are following me everywhere at the moment, and I’m not upset about it in the slightest. Their succinctness in offering a brief sense of wonder and nostalgia in a scattered and busy life cannot be understated. They are a unique kind of magic.

It’s enough to make you want to finish writing your own.