Join Johanna Baker-Dowdell and her personal insights as she interviews Dr Robin Morrow AM.

When I met Dr Robin Morrow it was like meeting an older version of my bookworm self.

Dr Morrow, who founded The Children’s Bookshop in Sydney, was holidaying in Tasmania, but made some time to meet me at Launceston Library, a venue we both thought fitting.

I was interviewing Dr Morrow ahead of International Children's Book Day, but our conversation extended beyond that topic to her appointment as the Australian representative on the International Board of Books forYoung People (IBBY) and the importance of books and reading for children.

She told me it was now as important as ever for children to have books.

"Tactile paper books are important, especially for babies and toddlers. They need to have the drama of turning the pages and examining the end papers,” Dr Morrow said.

"We have to fight to retain librarians in schools and the libraries people have access to so every kid has access to books."

Dr Morrow also told me how IBBY Australia helped pay for library vans that could drive on rubble to visit children not allowed to go outside after the 2011 Fukushima nuclear disaster in Japan.

"They went in with librarians and storytellers to the children and it was the most wonderful thing. They even got children to tell them their favourite book that they had lost, because they'd lost everything, and they would try to get the actual book to that place. It's goosebumpy stuff.”

She is the first Australian IBBY judge for the Hans ChristianAnderson Award since Dr Maurice Saxby in the 1980s.

I mentioned my grandmother, who was a teacher librarian and involved with the NSW Education Department before she retired, had spoken about Dr Saxby when I was younger.

This led us on a different trail, in which I discovered Dr Morrow knew my grandmother well, as both had worked on different sides of the book industry in Sydney.

Working as a journalist in a smallish regional city in a small state means it is likely I will interview people I know, or who know my family, but it was a thrill to meet someone who held my grandmother in such high esteem.

Dr Morrow's own love of books started when her mother read to her as a child, but it was an "amazing English teacher" who fired up the passion for her future career.

"My theory is behind every keen book person there is someone. Sometimes it will be a bookseller or a librarian or a teacher or an aunt or a grandparent; somebody who just gives books, or drags you into the library,” she said.

For me this person was my grandmother.

By the time we finished talking I felt like I’d gained a great aunt as well as a kindred book spirit.

Johanna is a journalist and author of the book Business & Baby on Board.

Email ThisBlogThis!Share to TwitterShare to FacebookShare to Pinterest
Labels: IBBY

Jenni Connor, recognised education consultant, shares her rich knowledge of children’s literature to make curriculum connections to four stunning Australian picture books dealing with fire and its devastating aftermath.
Literature needs to assert its place in the sun in these data-driven, assessment-focused times. The Literature strand which is central to the English Curriculum creates that place. The curriculum recognises that engagement and enjoyment should be key features of student experience with texts. The curriculum also aims to develop an informed appreciation of a variety of literary texts.
Following the recent bush fire season across the nation, including in Tasmania, I have taken four picture books dealing with that topic to highlight what they offer in terms of ‘aesthetic value and potential for enriching students’ lives and scope of experience’ (Shape of the Australian Curriculum, 2009. P.5). I connect each book to elements taken from the English Curriculum Content descriptions. The year levels selected are only a guide and, in fact, all four books could be used as comparative texts with older students.
Through the smoke, Phil Cummings & Andrew McLean(Scholastic, 2019) is a tale of three children, their imagination and the terror of bushfire. The picture book, suited to 5-7-year -olds, uses the extended metaphor of knights and dragons and recognises the immense contribution of firefighters as ‘the knights’ in question. Phil Cummings’ rich descriptive language captures the children’s initial delight as they roam unfettered through the bush and their growing fear as the world around them changes – We rode our charges through the rolling swell of windswept wheat fields…. the sleeping dragon woke. We suddenly heard the ferocious flap of its wings, its hungry and angry hiss’. McLean’s illustrations support the language text gently, avoiding any hint of trauma.
Curriculum connections - Literature Year 1: Understand how authors create characters using language and images. Make connection with own experience. Discuss features of plot, character and setting.
Fabish the Horse that Braved a Bushfire, NeridahMcMullin & Andrew McLean (Allen & Unwin, 2016) showcases McLean’s extraordinary talent for visually portraying the Australian landscape. It is a story of two heroes, the retired racehorse Fabish, who instinctively rescued seven yearlings and brave trainer John Evett who risked his life to save racehorses in the Black Saturday bushfires of 2009. McMullin’s spare, evocative prose dramatically depicts the unfolding scene – the sun scorched the land…. Withered brown grass crunched underfoot…. That summer, every living thing was hot…. Billowing smoke turned the day into darkness. The farm was ablaze, and the sky was on fire. The author and illustrator notes provide historical and personal context.
Curriculum connections – Literature Year2: Compare opinions about characters, events and settings between texts. Explore how language is used to present features of characters and settings in different texts.
Fire, Jackie French & Bruce Whatley (Scholastic, 2014) is another story of courage and strength in the face of natural disaster. Jackie French’s taut, sharp word text conveys the terrifying ferocity of nature out of control and drives the momentum of the narrative – Leaves like paper, burning, bleeding. Trees turned torches, flaming, feeding. Fire, the beast that ate it all. McLean’s vivid, atmospheric images provide a powerful contrast between the serene outback landscape and the fierce onslaught of the fire that threatens all life and engulfs the land. Again, the author and illustrator notes add valuable information for readers.
Curriculum connections – Literature Year 3: Discuss how language is used to describe settings and how settings shape and influence the mood of the narrative.
House on the Mountain, Ella Holcombe & David Cox (Allen & Unwin, 2019) is a heartbreaking and poignant picture book about one family’s experience on Black Saturday and the long process of healing and rebuilding. Told from a child’s perspective, we feel their growing fear as the heat of the day builds to a crescendo – My chest feels hollow, like a bird cage. The word text is impressively restrained but doesn’t shirk the harsh reality - …we talk about all the kids and teachers and families who will never come back. Cox’s illustrations, while striking, maintain a light touch in conveying the drama. In this case, the author’s notes are essential to fully understanding the true story and we deeply respect her commitment to ‘continuity, movement and growth’. The book is marketed as YA fiction, but I would use it in conjunction with related texts from upper primary on.
Curriculum connections - Literature Year 6: Analyse and evaluate similarities and differences in texts on similar topics. Explain how metaphor influences personal response.
Contemporary research confirms that it is the quality of a child’s vocabulary that predicts their success in literacy; it’s not just the sheer number of words a child has heard, but the richness of the conversation that matters. The ‘language’ of these picture books – in words and images – is carefully crafted and poetic. This language offers new ways to describe the world and ‘enriches and extends the life experience’ of young readers and listeners.
Jenni Connor
Writing & Education Consultancy

This week Patsy Jones gives us an excellent overview of Young Dark Emu, Bruce Pascoe’s younger readers’ version of Dark Emu, which he discussed in a session at the CBCA National Conference in Canberra on June 1. Mary Blake emailed notification of its arrival at the Aboriginal Education Library on May 21. 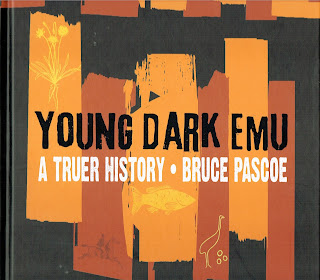 Australian writers have recently been addressing the need to broaden our Eurocentric history and literature regarding the colonisation of Australia. For example, Bill Gammage’s The Biggest Estate on Earth : how Aborigines made Australia, published in 2012, and Bruce Pascoe’s Dark Emu : Aboriginal Australia and the Birth of Agriculture, first published in 2014 with a second edition in 2019, have attracted much interest not only among academics but among the general public. We remember Bruce as the author of Fog a Dox, Mrs Whitlam, and other books for younger members of the community.


Now there is a version of Bruce’s book written especially for young people: Young Dark Emu : a truer history, recently published by Magabala Books Aboriginal Corporation.
Page 7 tells us ‘Dark emu is a shape in the dark areas between the stars of the Milky Way. It’s a different way of seeing’. The text contains, besides Bruce’s remarks and explanations, material from well-known contemporary explorers and commentators such as George Augustus Robinson, Thomas Mitchell, and Charles Sturt, and  quotations from contemporary diarists whose names we have not heard before. Indigenous agriculture, aquaculture, and food storage methods are described at firsthand by the Europeans who benefited from these methods and often, in their ignorance, destroyed what they saw.
My twelve-year-old grandson was specifically interested in the chapter on Aquaculture and remarked on the reminiscences of a local farmer, written in 1897, about the fish traps on the Murray River in previous years. Tom was indignant at the perspective of the writer, who described in detail the method of fishing with these traps, but referred to the ‘indolence’ rather than the ingenuity of the trap user.
The book is profusely illustrated, with a challenging variety of Indigenous and European art works reproduced in black, white, and ochre. A bibliography and picture credits provide other sources for a reader who wants to know more, and an index allows a reader to find specific information.
It is to be expected that copies of this book will find their way into every school library in Australia, and that the English classification of Australia as ‘terra nullius’ will be even more widely acknowledged to be inaccurate as a result.