Discover! A selection of information books that explore the sciences.

Botany, anthropology, zoology and geology! Patsy Jones shares some titles for young and teenage readers with inquiring minds to discover more about our world – past and present.

I can spend a lot of time (and money!) in a bookshop – too much, probably. With my youngest grandchild now in his teens, I don’t now have a great interest in the picturebook and junior fiction areas of a library or a bookshop, either. My eye can be caught by magnetic and thought-provoking adult non-fiction titles quite often though…..

One day I found Peter Wohlleben’s The hidden Life of Trees, and have been dipping into that often at home. I knew I would find it of interest to me, because personally-admired Tim Flannery, had written the foreword for the Australian edition (1916). 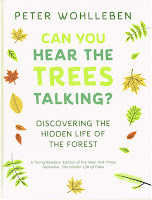 But quite recently I found a copy of a Canadian edition of the book, titled Can you Hear the Trees Talking?, which calls itself ‘A Young Readers’ Edition’ of Peter’s fascinating work. It is lavishly illustrated, though it focuses, of course, on North American forests and animal life.
As with any non-fiction book, there is a Contents section at the beginning, with some attention-grabbing headlines – for example:
* Do trees have grandparents?
* Is there a Forest Internet?
* What are trees afraid of?
* Do some trees prefer to be alone?
And the index is useful too, with some surprising entries to catch a child’s attention: there’s an entry for giraffes,  another for the toilet, another for the Moreton Bay fig tree.

Marcia Langton’s Welcome to Country: An Introduction to our First Peoples for Young Australians is much quieter in its presentation. There are some colour maps and illustrations, but most illustrations are in black and white. This book, published by Hardie Grant Travel in 2019, is the younger reader’s version of Welcome to Country: A Travel Guide to Indigenous Australia, published in 2018.  It does not divide Australia into the separate states that we know; it is no travel guide. It discusses different aspects of First People’s history and culture, so is a valuable source of information on aspects of Indigenous life such as kinship, language, and art. But issues such as the Stolen Generations and Native Title are also addressed.
It is a scholarly work with a careful index, and is more suitable for the secondary school student, providing a copious list of references and resources for further study. The appendix provides, among other things, five maps in colour. The first map shows ‘hypothesised pathways for colonization of Australia, based on the distance to water’; another shows ‘Native Title Determinations as at 31 March 2019’.

If the library of your local secondary school doesn’t have a copy available, please suggest that the librarian acquires several, enough to bring the material to the notice of all students.

I was surprised/impressed/slightly indignant to find this next book on the shelf in my local bookshop : Saving the Tasmanian Devil: How Science is Helping the World’s Largest Marsupial Carnivore Survive. This was written by Dorothy Hinshaw Patent, who lives in Montana, USA, and who was a college friend of Jenny Marshalll Groves, a geneticist, one of the scientists researching the Devil Facial Tumor Disease (DFTD) in Australia. I guess the fact that somebody had to come all the way from the USA to write a book of such potentially  world-wide interest is what makes me feel slightly indignant – can’t we write books like this for ourselves and the world, here in Australia?

The book is beautifully produced, with photographs of Tasmanian scenery and Australian scientists working in the area; and, of course, photographs of the Tasmanian Devil. The thylacine (Tasmanian tiger) gets a brief mention – the extinct thylacine ‘was shot, trapped, and poisoned as an enemy of sheep farmers’.

Chromosomes, the immune system, and cancer are explained with illustrations; there’s a glossary, a list of sources, and an index to assist further research. While the book is presented in a very approachable format, and will be very popular with primary school students, secondary students will find it of interest and a source of information as well. 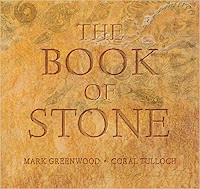 So I’ve looked at Botany, Anthropology, and Zoology – how about a quick look at Geology?  This title, though, may be more likely to be added to the picture book area. It’s The Book of Stone by Mark Greenwood and Coral Tulloch. Pictures of stones and fossils collected from many parts of the world have been used in the endpapers, with various captions indicating the name and origin of each. Each individual stone/fossil has a typed caption in the front endpapers, and its caption for the back endpapers is handwritten in a very attractive script. Any child with an interest in fossils and rocks will enjoy pursuing information about these samples. 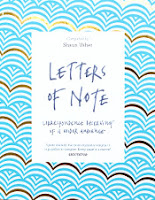 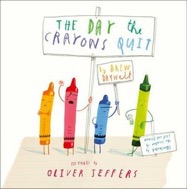 Posted by CBCA Tasmania at 17:28 No comments: Links to this post