Penny Garnsworthy, the CBCA Tas newsletter editor, takes us to some of the places in the United Kingdom that are linked with children’s books.

I recently spent some time in the UK and included on my list of things to see and do were attractions of a literary nature.

In Edinburgh I visited the statue of Sherlock Holmes, located near the birthplace of Sir Arthur Conan Doyle. Then I lunched at The Conan Doyle, a fabulous pub decorated in the style you would expect from Holmes himself. In London I visited the 221B Baker Street premises of Sherlock Holmes, now a museum full of Holmes memorabilia. It has the famously furnished upstairs room where Holmes and Watson spent their days mulling over mysteries and next door there is even a café called Mrs Hudson’s Restaurant. 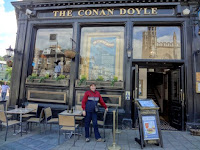 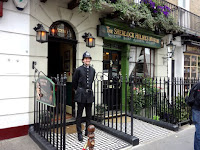 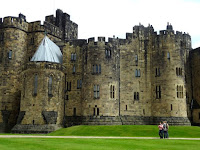 In northern England, I spent a day at Alnwick Castle where Harry Potter and the Philosopher’s Stone was filmed. Evidence of this is all around in the plethora of Harry Potter souvenirs available in the castle’s shops together with the daily broomstick-riding lessons where children and adults alike cavort on the castle green led by an appropriately dressed witch and wizard. 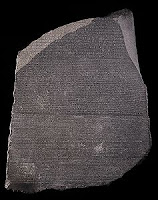 But it wasn’t just the fun and frivolity of fiction I was interested in. As a lover of ancient history, there was one very important piece of literature I just had to see; The Rosetta Stone, which is now housed in the British Museum.

The Rosetta Stone features two translations of the same decree in the three scripts that were common in ancient Egypt at the time; hieroglyphic, Greek and Demotic. It dates back to 196BC and was discovered in 1799. Nobody had ever been able to decipher Egyptian hieroglyphs but in 1822 Frenchman Jean Francois Champollion, who could read both Greek and Coptic, finally did it and the rest, as they say, is history.