Join Lyndon Riggall as he ignites an old passion for a wonderful fantasy series that enchanted young readers as they followed stalwart characters on challenging quests across the dangerous lands of Deltora.

On my birthday this year there was one present that definitely took me by surprise. Actually, it was two presents, given to me by my friends Georgie and Mitchell, stacked in strange rectangular shapes that looked like two small shoeboxes. When I opened them, I gasped at what they contained: a complete original collection of Emily Rodda’s Deltora Quest 1, 2 and 3, as well as a few supplementary volumes. Something that had long been sleeping inside me was awakened. I never owned the Deltora Quest when I was a child, though I remember scouring the school library shelves each week for the volume with the right number of gems or the appropriate sections of pipe to match where I was in Lief’s story. Key among the initial appeal of the books (and the reason that I treasure them so much now), was that they were gorgeous. A few decades on, when every year book covers seem to include less and less detail, the series stands out as being aesthetically astonishing, each part enfolded in a feature illustration by Marc McBride that slyly whispers of the dangers that lie within. As I have been revisiting the novels over the past few weeks, their timelessness is evident. They are complex, fast-paced and short enough that they always leave the reader wanting more. While Rodda has written so many books and stories in and around the world created here (including, of course, Rowan of Rin, the Rondo books and the Three Doors trilogy), I must admit that for me it will always be Deltora Quest that is her masterpiece. The world Deltora has seen enormous global success, from 18 million copies sold worldwide, to an anime series that ran for sixty-five episodes. There have been rumours of Deltora coming to the big or small screen in English for decades, but for me it is sometimes very special to have a work of this quality without a thousand adaptations, variations and merchandising opportunities. Deltora Quest doesn’t need to be brought to the masses with an enormous budget to be one our greatest fantasy series for children. Readers know the secret. 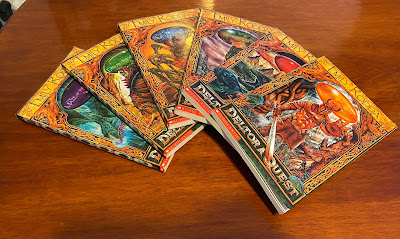 As a young primary school student, I ran to Deltora, and it has been exciting to see the door open once again and to be able to return. At the beginning of my own journey with the series, Deltora Quest was an exercise in simple adventure… I was breathless at the challenges faced by its heroes, trying to crack the puzzles and codes they came across before they solved them, simply enjoying the sheer wild fantasy that Rodda was creating. Now, I see the value of the messages hiding beneath the surface, too: the importance of working together, the fight to save the natural world and the need for leaders to stay in touch with their own humanity. For her part, Rodda seems to be in no way done with her creation. Her latest series set there, Star of Deltora, has only concluded in the last few years, while The Glimme, which was stunningly produced with her Deltora partner-in-crime Marc McBride, picked up an Honour award at the CBCA awards in 2020.

The first volume in the Deltora Quest series, The Forests of Silence, was released at the turn of the millennium, and as such it celebrated its 21st anniversary last year, with a new edition of the collection released in celebration. In the intervening time since my ten-year-old self first got his hands on the series, I am proud to state that Rodda’s work has lost none of its trademark sparkle or shine. It will always feel to me like a place half-forgotten in a dream; a memory lost in some unfathomable depth, like a treasure fallen into a dark lake. Some time before I had the confidence or the stamina to tackle such classics of fantasy as The Hobbit or The Lord of the Rings, when even C.S. Lewis could be daunting, Deltora was waiting for me, its magic begging to be released. I will always be grateful to Rodda for her sharp writing that was never puerile, for the complexity of her ideas and for her love of challenge and adventure. I will always be grateful for my friends, who knew that you could turn thirty-two and still believe in the imagined places that mattered to you when you were a child.

Once, in a school library, we counted gems on spines and swapped books like secrets. Now, I hold them in my hand once again, and with every turn of the page I am in three places at once. I am here, on my couch; I am there in my school library, lying on a beanbag with my feet in the air…

…And best of all, I am, again, in the land of Deltora, where adventure awaits.

Lyndon Riggall is a writer and senior-secondary English teacher at Launceston College. His latest picture book, Becoming Ellie, was created in collaboration with Graeme Whittle, and he is also co-host, with Annie Warburton, of the Tamar Valley Writers’ Festival podcast. Lyndon can be found at http://www.lyndonriggall.com