Representations of War in Australian and Ukrainian Picturebooks

This week’s post presents a snapshot of doctoral research undertaken by Halyna Pavlyshyn. Her insights and discussion have a strong focus on visual literacy as Halyna compares and contrasts the techniques employed by illustrators in these selected titles.

The comparison of Australian and Ukrainian picturebooks representing war reveals a number of tendencies. While the war is condemned in both cultures - it is represented as a gory, horrific and destructive experience - the message is conveyed differently. In Australia, war narratives usually focus on the First World War, the legend of Anzacs and the lives of ordinary people who either went to war or who stayed in Australia hoping that their family members would return home safe. The war mostly takes place in Europe. The Australian picturebooks representing war often explore such themes as death, orphanhood, separation, military service, national identity, mateship, and the impact of war on its survivors (e.g. My Mother’s Eyes; Ride, Ricardo, Ride; Dreaming Soldiers). 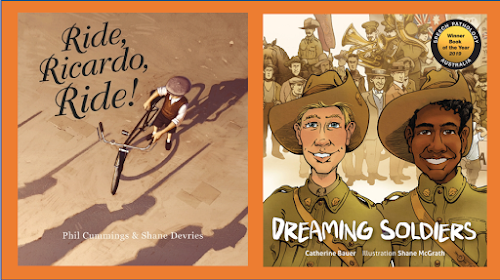 In contrast, the Ukrainian contemporary picturebooks about war are mostly written as tales with animal-like characters. Even though they refer to the current events in Ukraine, the war takes place in the imaginary land. The books show the horrors and the devastating consequences of war; however, they do it in a careful manner. It seems that despite condemning war, the authors attempt to give hope to their young readers and to protect them from the harsh reality (e.g. The War that Changed the Rondo, Adamantine Ants). In addition, the Australian and Ukrainian war narratives employ distinct colour palettes to represent war. The sand-like yellow, earthy umbra, brownish sepia and clay orange, less often deep blue, as well as black and white are prevailing colours used to represent war in the Australian picturebooks. The distinction is drawn between Europe (the land of war) and Australia (beautiful homeland). This can be seen prominently in My Mother’s Eyes by Mark Wilson, where the colours used for depicting war are black, red, orange and yellow; and the colours to represent Australia are green and blue colours of the peaceful sky and the bushland.

Whereas, the Ukrainian picturebooks representing war show the contrast not so much in space, but in time: before the war and after war. The vibrant poppy red, bright orange, lemon-like yellow, spring-grass-green, light blue and white are used to depict life before the war. They are contrasted with pitch-dark black, fern-like-green, dark brown, bloody red, deep violet and dark blue for the illustrations representing the wartime and the time after the war. The colours, therefore, emphasise the difference between the peaceful time and the wartime in a war zone. The prominent example is the book The War that Changed Rondo by Andriy Lesiv and Romana Romanyshyn. At the end of the Ukrainian picturebooks, the colours are changed: they are not as vivid and bright as they used to be; however, not as gloomy as during the war. This technique might be used by the authors to give hope to the young Ukrainian readers witnessing the Russo-Ukrainian war which started in 2014.

You can find out more about these titles online.

Links for the Ukrainian picturebooks:

Links for the Australian picturebooks: