Ella and the Ocean by Lian Tanner, illustrated by Jonathan Bentley

Report on launch of Lian Tanner's first picture book at Hobart Bookshop, Sunday 4th August.
There was an excellent crowd gathered together, excited to celebrate the release of Lian Tanner’s first picture book, Ella and the Ocean, which was launched by Her Excellency, Professor the Honourable Kate Warner, the Governor of Tasmania, AC with a great deal of warmth, humour and obvious enjoyment.

The MC was young English teacher and writer Lyndon Riggall, a regular blogger for the CBCA Tasmanian Branch, and well known for his involvement with Readers Cup competitions. He skillfully interviewed Lian and Kate, bringing out a wonderful amount of interesting detail.

Lian, author of the internationally bestselling The Keepers series, The Rogues and The Hidden, spoke like a first-time author, which she felt herself to be as the author of a first picture book. The average novel is 40 to 60 thousand words, whereas a picture book is closer to 500 words and the author must leave room for the illustrator to ‘speak’ in images to complement the written word. She did not communicate with Jonathan until all the images were finalised, so these represent his ‘voice’ in the story. Unfortunately Jonathan Bentley was unable to be at the launch, but Lian was extremely pleased with his work and hopes very much that she will be able to work with him again. Her idea of an illustrator’s function is to ‘Take your words and make them fly.’

‘Ella lived in the red-dirt country where the earth was as dry as old bones and it hadn't rained for years and years and years. One night, Ella dreamt of the ocean...’ 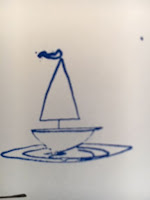 The story is set in the Kimberleys, blue ocean contrasting with red country.
For Lian dreams are important, and the ocean is such a great place to play. Ella loves her visit to the ocean, and there is a little boat on almost every page. There was also a great activity for children to hunt in the dark with torches around the bookshop for 20 hidden paper boats in order to win prizes. Lian had an ink stamp with the sailing boat on it which she used when she signed people’s books which added a great touch to her signature.


Jonathan Bentley is the illustrator of many wonderful picture books, including The Second Sky by Patrick Guest (CBCA Shortlist 2018), Tales from a Tall Forest by Shaun Micallef, First Day by Andrew Daddo, Blue Sky Yellow Kite by Janet A. Holmes, and Where is Bear?