Laura Ingalls Wilder and her Tales of Childhood

This week Patsy revisits an old and revitalised favourite - join her as she dips her toes in the prairie wilds of Dakota to explore Wilder's tales.

Some months ago I was poking about the young people’s section in our local bookshop, checking, as usual, to see if there was anything wonderful I’d missed, when my eye was drawn to an inviting set of books on a shelf. I recognised the Little house series by Laura Ingalls Wilder, which I had read years ago while my children were the age to read them with me. All paperbacks, same illustrations by Garth Williams, but in cheerful colour this time….

As the grandmother of a fast-aging group of young people, I am pleased to still have a nine-year-old who loves to dip into the suggestions I make for him, so I bought what I remembered as the first two of the series, Little House in the Big Woods and Little House on the Prairie. The publisher had labelled these as 1 and 3 in the set, which surprised me a bit – Farmer boy was now number 2. Still, I thought my selections would provide enough material to assess whether I still enjoyed these books, and whether Tom would or might.

No doubt about that – after I had read these two and thoroughly enjoyed them, I passed them on to him…. Five minutes later – a grunt of surprise, interest, and ‘Nanna, do people eat bears?’  He was hooked!  Not all the titles were available at the shop so we borrowed some from the LINC, which fortunately still has at least one copy of each of the 1930-40 publications (mostly housed in the Fiction Stack, so they have to be requested…)  But I now have the complete set in this new full colour edition, published in 2004.

Tom’s favourite titles, he told me, were Farmer Boy and The Long Winter. It’s not surprising he loved the story of Almanzo as a nine-year-old child on a farm in New York State in the 1860s. Almanzo was the youngest of a family of four children, and life on the farm was not easy. Every child had to be completely immersed in the seasonal demands of producing and preserving the food needed to see the family through a full year, with perhaps a little left over to convert to cash to buy the things the family could not produce. But there were compensations – if Almanzo was needed on the farm, that took precedence over going to school, of course. And he had the task of training a pair of calves to their future function as draught oxen working on the farm. Tom found the description of this process very interesting as he did the collection of great blocks of ice from the frozen pond and its careful storage in the ice-house for the summer.

The Long Winter was of great interest to me as well – for seven months the family was snowed in to their house in the little town! To Tom, the really memorable part of this book was the long and dangerous, but eventually successful, journey made by the teenagers Almanzo and Cap (at least forty miles there and back) across a roadless, snow-covered prairie in search of a store of wheat they had heard about – families were starving in the little town of De Smet, in Dakota Territory.

The series portrays life on the frontier in the Mid-West of what is now the USA and embodies many issues which I found worthy of consideration and which may be of interest in the classroom in twentieth-century Tasmania, with possible parallels between the Australian and American history of settlement.

During the long winter, even the careful settlers with their ethic of self-reliance were in danger of starving during an amazingly harsh and long blizzard period. All the families and communities were independent and had no-one to rely on but themselves. You want to move further west and need a wagon to undertake the journey with your family?  Build it yourself – and the child Laura was able as an adult to describe how her father did this.

Interactions between the natives and the encroaching settlers are described as Laura saw them; and the impact on local wildlife, even through a child’s eyes, might also be a discussion point in the classroom. 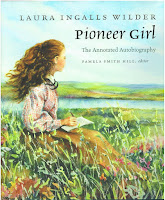 You will understand from the above that I found the series very interesting and thought-provoking on this re-read, and it appears that the material has not become ‘old hat’ in the USA either. In 2014 Laura’s actual autobiography, not previously published, was made available, with annotations, by the South Dakota State Historical Society and editor Pamela Smith Hill, under the title Pioneer Girl: The Annotated Autobiography.

So dig out your old copies, at home or at school – or at the LINC! – and see how you feel about them. And try them in the classroom as well….