An Interesting and Fun Book for Teachers and Students

Helen Rothwell provides a glimpse into a classroom that is enriched through opportunities to engage with texts – in this case a wonderful visual spread of world history. 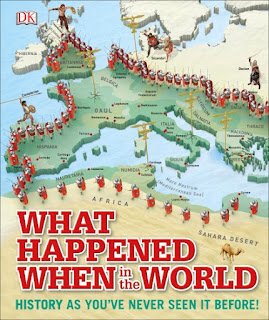 As an upper primary teacher, I’m always on the lookout for books that captivate students and grab my attention as well. Last year’s release by Dorling Kindersley, What Happened When in the World: History as You’ve Never Seen it Before! is one such book.

This book is an historical atlas detailing historical events that impacted upon the world and shaped it as we know it today. An intriguing blend of geography and history. There are 60 A3 coloured maps grouped into the Ancient World, Medieval World, Modern World and the 20th & 21st Centuries.
-  Ancient World maps: e.g., The Ice Age, Cave Art, The First Cities, The Origins of Writing, Pacific Settlers, Ancient Inventions and Wonders.
-  Medieval World maps: e.g., The Silk Road, Vikings, The Black Death, China’s Golden Age, Medieval Inventions.
-  Modern World maps: e.g., The Age of Exploration, Slavery, Revolutions, Gold Rushes, The Age of Steam, Europe’s Empires, Modern Inventions.
-  20th & 21st Century maps: The Race to the South Pole, The Story of Flight, The Space Age, The Internet, The Rise of China.

I have a reading zone in my classroom and have this book displayed on a table next to where I read my daily read aloud book to students. I’m currently reading the fabulous I Wonder by R. J. Palacio but we always end our sessions with a quick dive into our history atlas and invariably have a ten minute discussion on a varied range of topics.

I’ve seen students go to our café laptops (they stand at the laptop bench to quickly look up something on the internet rather than sitting down for a lengthy session) to quickly check their thinking or I’ve heard students talking amongst themselves, sometimes completely random comments that have been ignited by seeing a map. For example, we were looking at the map The Age of Exploration and later that day I heard a student commenting to another that they thought it was interesting that so many explorers seemed to be Spanish and hadn’t it been the Dutch and the East India Company that had been the big explorers! Critical thinking at its best.

Another benefit is you can’t over expose students to the layout of the continents, migration and the never-ending curiosity and bravery of individuals and peoples. A pictorial stimulus has begun many a discussion on how many of the explorations started because of societal needs, politics, a monarch’s greed or one person asking ‘why not’ and then how the effects of those historical events have shaped our lives. You can 'look inside' the book to view some of these fascinating spreads of history.