"Not so different from Harry" - Lyndon reviews A Casual Vacancy 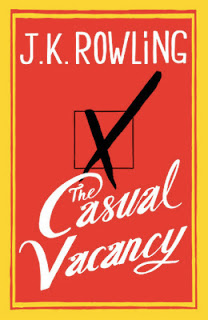 SOME THOUGHTS ON THE CASUAL VACANCY
What Fats wanted to recover was a kind of innocence, and the route he had chosen back to it was through all the things that were supposed to be bad for you, but which, paradoxically, seemed to Fats to be the one true way to authenticity; a kind of purity. It was curious how often everything was back to front, the inverse of what they told you; Fats was starting to think that if you flipped every bit of received wisdom on its head you would have the truth.
J.K. Rowling was right when she said in her Australian interview with Jennifer Byrne that she had promised us seven Harry Potter books, and she didn’t owe her readers anything. She might be wrong, however, if she thinks that what she writes after Harry Potter and the Deathly Hallows will not be read through cracked and sticky-taped Harry Potter lenses, and that the now-adult readers of her original series can ever hope to conquer the insatiable desire to search for traces of the childhood friend they’ve now lost in everything that bears her name. Hogwarts casts a long shadow.
Rowling has certainly tried with The Casual Vacancy however, to make sure this quest is soon proven fruitless. There is no touch of Harry here, as all the wide-eyed wonder of her children’s series is quickly abandoned for bleak and bitter realism. Those who, like myself, had come to read the heavily guarded details of the novel’s release as an indication of a kind of an Agatha Christie or Downton Abbey-eqsue idyllic cottage drama, will soon see that there is more bubbling under the surface than simple political competition in Pagford. In fact, there’s everything; my friends Bill and Isobel have contrived a game - what crime doesn’t occur in The Casual Vacancy? (Hint: There aren’t many. Yes, probably not even that one.)
There is swearing too; lots of it. By page fifteen I had to put it down for a moment and take a breather. Was this really J.K. Rowling? It took a good while for me to de-tune my interior monologue, which was always calling back to Potter and trying to reconcile the two versions of Rowling as a writer. In the end trying to tie my portrait of Rowling together was fruitless - as hard as it might be, the only way to fully get to The Casual Vacancy is to push it away from Potter.
Once you grapple with the world that you’ve entered - so much more like our own, so much less like Rowling’s other England - after a gradual warm-up The Casual Vacancy is an incredible novel. Dark and tragic, by the three quarter mark it grips with the hardened intensity and oblivious midnight page-turning that only Rowling can. It’s the kind of book that could, and perhaps should, win awards bigger than the Smarties prize. There will be an inevitable backlash from people who were hoping for a more gentle novel of course, and expect many abandoned copies to show up in second-hand bins and opportunity shops, as popular readers realise that they were tricked into buying a literary text, but I think that what Rowling has done here is more important than pleasing her old fans - she’s proved that there’s an extremely serious heart beating beneath the smoke and mirrors of the Potter series. Some of us have been arguing it for years, but The Casual Vacancy proves it: Rowling is a serious writer. I’d like to see some of her contemporary hit-machines, like E.L. James (who recently outsold Potter with her Fifty Shades series), write a novel as intellectually engaging as this.
My biggest fear about The Casual Vacancy though, is that it will be hard to keep it out of the hands of kids. As a 22 year-old I can rightly insist upon reading it, having (arguably) grown up from my own Harry odyssey, but it’s difficult to imagine that a 12 year-old version of me that had just finished The Deathly Hallows wouldn’t attempt the same. School libraries, I hope, will be wise enough not to purchase it for their shelves, and parents are encouraged to be vigilant: The Casual Vacancy has lashings of sex, drugs, domestic violence and hip-hop. There is an ugly side to this sleepy village.
For mum and dad though, I think Rowling’s done it again. She’s a writer at the top of her game, and once the initial shock wears off, she’s proven she can make that adult leap that many British children’s writers - A. A. Milne and Roald Dahl as two examples - haven’t successfully been able to. This is not a novel that everyone will latch on to, but for those who do love it, it will be an all-encompassing love; the novel defines and explores the problems of an entire generation. For some, The Casual Vacancy will ring a truly resounding note, and hold a special place in their shelves and hearts.
In that respect, perhaps it’s not so different from Harry, after all.