Imagination is alive and well - by Penny Garnsworthy 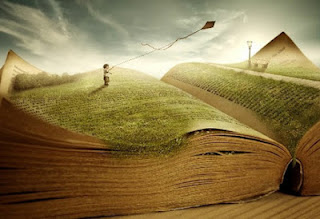 Recently I was approached to judge a short story competition for one of the region's festivals.

As part of this competition, grade 5 and 6 students at two local schools were asked to write, and illustrate, what they thought the region would 'look' like in 20 years' time. How hard could it be, I thought to myself as I enthusiastically said yes to the suggestion. Within a few weeks I was presented with a huge pile of entries. And what I quickly came to realise was that when the competition was announced, no parameters had been set ... for anything.

One of the teachers had been kind enough to shortlist entries for their class which should have made choosing a winner, and runners-up quite easy. But because there were no parameters, one story comprised two paragraphs, another two pages. That was fine, and I simply ignored my usually strong desire to correct grammar and spelling, and read the stories as entertainment.

Another teacher hadn't shortlisted at all so I waded through those entries only to discover that half the entries were about the requested topic, and half were about entirely unrelated topics. However, as I had for the first group, I finally chose a winner and runners-up.

Then I received another surprise. Unbeknown to the organisers (and me too of course) a number of younger children had decided to participate in the competition. These were grade 1 students who illustrated their ideas in a range of formats and the spread them across anywhere from two to eight pages! Some of them had even added text and their teacher had kindly translated any words this poor judge may not undertstand.

Reading the stories was certainly a challenge, but also a delight and I had great fun! And there was one thing all the entries had in common. Imagination.

In 20 years' time, according to the entries, adults will have flying cars, kids will ride hoverboards to school, every person will have a personal robot, mobile phones will be holograms and trips to the moon will be commonplace (some on flying horses).

iPods and iPads will be the norm in every classroom and ... there won't be any books in school. Scary thought, isn't it?
Posted by CBCA Tasmania at 14:43