The Haven: In Defence of the School Library

Psst.  Have you noticed? Libraries are disappearing… fast. Lyndon Riggall shines a spotlight on a worrying trend with serious consequences.

When you are someone in the community who is known for their love of the written word, there are two things that people invariably want to talk to you about: e-books, and what is happening to (or has already happened to) their local school library.

The first conversation is a fairly simple one: yes, I love my local bookshops, and there is still something about books printed on paper. No, I will never get used to charging a book from a power point, which feels like a violation of some natural order. I agree, it does seem a reasonable trade-off for the advantage of carrying a thousand books in your pocket, and yes, changing the font size as necessary and the subtle lighting of the screen that can be enjoyed for nights on end without a headtorch on a camping trip, or next to a sleeping partner long into the small hours of the morning, is a revelation. 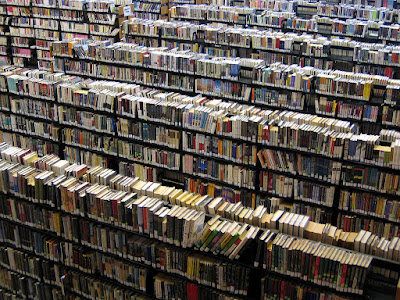 The second kind of conversation is less straightforward, and this is often because there is a kind of grief that comes with it. A school library, I am told, is shrinking. The teacher librarian has disappeared without fuss or furor, and now the building is open only if and when a teacher can make use of the facilities—the old doors creaking apart to dark shadows like the entrance to a crypt, literary tombstone stacked upon tombstone. In some cases, the library has shrunk, replaced by a series of trolleys, an in-class bookshelf, or a storeroom somewhere near the toilet block. Worse, occasionally it is already too late. The library, I am told, is gone. Schools—such big, unwieldy, unyielding places sometimes—can do this as quickly as taking a breath, and so in an instant it has instead become a classroom; two classrooms; three classrooms. Now, it is as if it was never there at all. A library ends, not with a bang or a whimper, but with an almost inaudible “Shhhhhh.”

I have spoken many times on this blog, in passing, about the value of libraries, which have always struck me as the most absurd and inspiring of institutions: a building dedicated to the free access of information and story; perhaps one of the last bastions of a time in which we actively strove towards a utopian world where knowledge was available to all of us and we really could have something for nothing. Libraries, I accept, need to evolve to survive. I remember feeling a kind of shock and horror growing up on the day that banks of computers invaded the bookshelves, and the definition of what our library was, and who it serviced, expanded to include people who may visit the library every day and yet very rarely cracked the spine of a book, but each library—in both school and the community at large—was a safe haven. I have heard a hundred stories of the readers, the computer nerds, the misfits and the bullied who found solace in a quiet corner beyond the librarian’s desk. In some cases, its very existence can be life-saving.

The loss of our school libraries points to the simple and fundamental truth that humans have been living with for some (if not all) time: honestly, we have no idea what’s good for us. A library is a remarkable thing, but, like so many remarkable things, the hole left behind by its absence is often only properly and acutely felt when it is already too late.

I suppose the other side of this discussion is that I only hear about all of these libraries and what is happening to them because people are passionate. They feel, as I do, that a school without a well-stocked library is a mere shadow of what it could be… it is a house without its hearth; a body without a brain or a beating heart. Encouraging children to read, and to read with pleasure and enthusiasm, consistently and often, is one of the biggest challenges of our time, and I admit that with no hesitation (I might have mentioned it, but you know we have no idea what’s good for us). We need to use our libraries, I know, or we will lose them. Still, there is only one type of library that always fails in its mission to bring the printed word to the wider world, free and without favour, and which is dwindling with terrifying, heartbreaking, ever-increasing frequency, locally, nationally and across the earth…

The library that is no longer there at all.

Lyndon Riggall is a writer and teacher from Launceston. He is co-host with Annie Warburton of the Tamar Valley Writers Festival Podcast, and in 2019 released his first picture book, Becoming Ellie, in collaboration with artist Graeme Whittle. Lyndon can be found at http://lyndonriggall.com and on Twitter @lyndonriggall.

Editors’ note: Indifference and inertia are part of the problem. Become active and champion children’s rights to quality library services that will support their emotional, social and academic growth and well being. Visit Students Need School Libraries to find out more.

Email ThisBlogThis!Share to TwitterShare to FacebookShare to Pinterest
Labels: libraries