Now residing in Huonville, Tasmania, Geoff Parton introduces himself and reflects on how his childhood experiences have informed his writing through the book series and the characters of Ugo and Jack.

I was born in 1948. In those days, Duffy's Forest, Nth of Sydney where we lived, was mostly untouched bush with just a few scattered houses. It bordered Ku-ring-gai Chase, a name taken from the Guringai aboriginal people. It’s a large area of almost 15000 hectares of bushland. Today it is National Park but in those days it was just natural bush for anybody to explore. Meandering right through the middle of the park is Cowan creek, a beautiful tributary of the Hawkesbury River.

Living on a farm that bordered this enormous bush land was fantastic, somehow it seemed as though it all belonged to me! In those days, as a kid, I felt like an explorer, as nobody else had penetrated deep into these areas for well over a hundred years – it was my world. A six hour walk from the farm to Cowan Creek brought me to a place called Duffy's Wharf. It had been derelict for over 100 years, with just part of a sign left, which read, ‘ring bell for ferry.’ On the farm in the late 40’s and early 50’s, there was virtually no communication, we didn't have electricity or a phone, television was unheard, but we did have a radio which was everything.

Because I was free to use my imagination, I became open to all possibilities, some people might say I have a big imagination, it’s true and it’s all because of my closeness to nature. This enabled me to handle death and tragedy in a realistic way. A lack of education turned out to be my greatest asset, as it helped to open my ‘special door’ to the spirit world. I am not religious, but I know there is more than just the physical world we are in at the moment.

With this back ground and 72 years of dare I say it, wisdom, I have been able to write a series of 5 children’s adventure books. In UGO and JACK, Jack has an unhappy home life on a remote farm. His alcoholic father and bullying older brother make life miserable for him and his younger brother Billy. His only moments of brightness are an occasional escape to the beautiful wooded valley near the farm.

On one such visit a freak accident leaves him unconscious. Drawn into a strange but wonderful encounter with the spirit world, he meets a new friend Ugo at his home in Fire Fly Valley. An unexpected opportunity arises to explore the valley further and Jack is taken into a world of completely new dimensions where he can see things previously hidden. Wherever there is life he discovers, there is also a spiritual force and he learns that he can even change the future for generations to come.

Books 2, 3, 4 and 5 are all different stories, but are still very much seamed together. The first book, Ugo and Jack was released  February 2021 by Olympia Publishers and book two was released in June. The novels, targeting 8 to 14 year olds, are full of adventure and excitement, they are uplifting and give purpose to life, when sometimes there seems there isn’t any! In describing his works Geoff states: “I would describe the books as being very different to the usual children's books being published today – they are raw and real. Life isn’t a fairy tale and I am sure children know that. In real family life, there are many aspects that parents want to keep hidden, but the kids, they know. We all have a public face so to speak.” 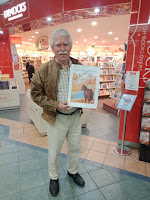 Editor’s note: Ugo and Jack books are available in  some local bookstores in Hobart, through Libraries Tasmania and online.