Apart from children’s literature, one of my other passions is history, and especially Australia’s convict heritage. I am currently teaching the subject to a group of older adults. Wanting also to introduce them to some children’s literature I have revisited books for children. In the process I discovered several “new” ones. I hope you do too.

One of my favourites since it was published in 2014 (it was also the winner in the Eve Pownall category of the 2015 Book of the Year Awards) is A-Z of Convicts in Van Diemen’s Land by Simon Barnard. This large format book gives us an insight into all levels of life in the convict era using detailed digital drawings to supplement the text. All research is based on contemporary records. Where relevant, the illustrations spread over a double page spread. Along the way, there are interesting snippets about individual convicts. Barnard’s own website gives further information and reading if required. 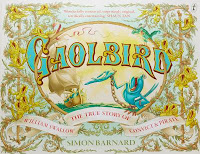 Another of Simon Barnard’s titles is Gaolbird (2017). This time he tells the chaotic story of William Swallow from his arrival in 1821 aboard the Malabar as William Walker. He escaped several times, became a pirate, returned to England; was recaptured and re-transported on the Georgiana to Van Diemen’s Land (1831). He again escaped and was transported a third time on the Kains. This is wonderfully researched “stuff of Aussie legends”, aided and abetted by interesting cartoon-like illustrations. 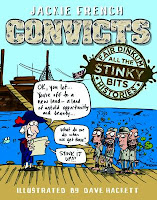 Jackie French’s 2021 title Convicts: Fair Dinkum Histories - All the Stinky Bits brings together some of the less pleasant parts of our history, starting with smelly, crowded transport ships and continuing to the tough and smelly life after arrival. French’s background research is not as obviously detailed as Barnard’s (there’s no index or bibliography), but it is all based on fact. Dave Hackett’s cartoon illustrations add humour but also focus on facts. 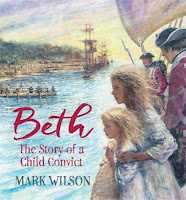 Beth: The Story of a child Convict by Mark Wilson (2016) tells the story in picture book format of a child convict, based on Elizabeth Hayward, the youngest female convict in the First Fleet. Wilson also used the journals of William Bradley and Arthur Bowes Smyth, the surgeon and artist of the Lady Penryn. Wilson’s moving text shows the hardships of the first months in the new colony and the challenges of late 18th century life but for me, his illustrations don’t convey the desperation of life in those times.

My Name is Lizzy Flynn by Claire Saxby and Lizzy Newcomb (2015). The fictitious Lizzie Flynn tells her own story on the 1841 voyage of the Rajah, to Van Diemen’s Land. During this trip, some of the women created a large quilt which is now housed in the National Gallery in Canberra. Lizzie details her perceptions of the long trip, with friendships and animosity, from England to her new home.

Convict Girl: The Diary of Mary Beckwith 1801-1803 by Chrissy Michaels. Mary’s fictitious diary details her life from her conviction at London’s Old Bailey and transported with her mother (also Mary) on the Nile to Sydney in 1801.Through her mother’s connections she is connected to the explorers Nicholas Baudin and Matthew Flinders. Many of the details of the real Mary’s story are suspect, but it makes for an interesting link between a convict girl and early Australian explorers.

What do you think I have missed?