I recently read an article in the Telegraph about Robert Muchamore’s visit to a Youth Offenders Institution (at Werrington in Staffordshire, UK). His Cherub series has become a hit with many of the inmates who have found these books give them a way of escaping from the realities of their current life, while reading a fast-paced narrative which has many themes which they can relate to. 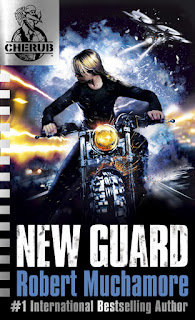 Muchamore’s novels contain content (violence, sex and drugs) which parents may not like their children reading, but it is this gritty contemporary element which attracts the readers in the YOI. Muchamore himself grew up in a tough part of London where he didn’t achieve academic success though he’d always wanted to be a writer. His novels resonate with many young men. The article was in part a celebration of Muchamore’s newest Cherub title, New Guard, published in June 2016 said to be the last in this series, but also of his most recent title released this month, the fourth in the Rock War series, called Gone Wild.

The YOI Werrington is one of a number of prisons which has joined the Reading Ahead Programme which encourages young people and adults to change their perception of reading, by recognising that reading is more than just books: newspapers, magazines and websites. There are many levels of the programme for different age groups.

What books have you discovered to help young people engage with reading?