Many of us are fascinated by trains and travelling by train, especially those of us in Tasmania where we no longer have passenger trains. Adults dream of the iconic rail journeys of the world. Children are no exception though their wishes tend to be less exotic and there are many who just want to be a train driver.

So, after spending quite a lot of time over this past year using regular train services in England it seems a good idea to reflect on some wonderful picture books. I have limited myself to this genre though I could venture into titles for more advanced readers: think of the Harry Potter series and the Hogwarts Express, the Adventures of Paddington Bear which start from the iconic station after his arrival from darkest Peru, Murder on the Orient Express or On the Blue Comet by Rosemary Wells. And so many others. 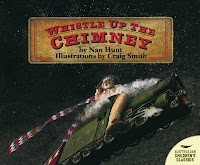 Many of these titles will now be out of print, but fortunately not all. Here are some of my favourites and there’s no priority in this listing.

Whistle Up the Chimney by Craig Smith and Nan Hunt. Mrs Mack throws some pieces of wood from an old railway carriage onto her fire and she suddenly has an express train in her chimney. A great piece of fantasy.
Polar Express by Chris van Allsburg. Beautiful illustrations and simple storyline. A young boy joins the Polar Express on Christmas Eve on his way to the North Pole. There, as recipient of the first gift from Santa, he chooses one of the bells from the reindeer. This is the bell which rings “for all who truly believe”. 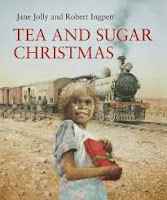 Tea and Sugar Christmas by Jane Jolly and Robert Ingpen. This is the story of the train that travelled for more than 80 years taking supplies to the people along the line from Port Augusta to Kalgoorlie. At Christmas, Father Christmas was on board and everyone along the line anticipated the arrival of that special service.
The Little Engine that Could. Various editions. This has not lost any of its delight since its first publication one hundred years ago. The engine doesn’t think it can get up the hill but those around convince him that he can. The repeated phrase “I think I can” is great to encourage child-reader participation as well as teaching children the power of perseverance. 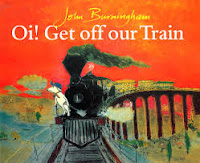 Oi! Get Off our Train by John Burningham. A young boy drives the train which various animals try to board, citing all the reasons that they are becoming endangered, while others try to reason why they should not be allowed. It’s a good introduction to animal conservation, aided by Burningham’s mixed media illustrations. 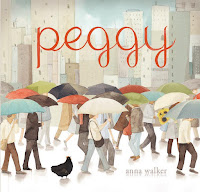 Peggy by Anna Walker. Peggy gets lost when she goes exploring in the city. When she suddenly becomes homesick she follows some bright sunflowers which lead her onto a train and after they disappear she turns to the pigeons to help find home. This book relies on illustrations rather than many words to tell the story. 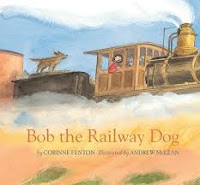 Bob the Railway Dog by Corinne Fenton and Andrew McLean. Based on the true story of a dog who travelled the trains in South Australia in the 1880s. Although he was adopted by one guard, he did enjoy train hopping, so that the whole railway system looked out for him. McLean’s illustrations capture the locations and especially Bob’s character. 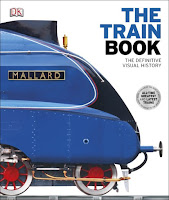 And to finish: The only information book I am going to mention. The Train Book by Dorling Kindersley traces the history of trains from the earliest beginnings to the most modern bullet trains. Lots of pictures with as much information as the most avid enthusiast could want.

Please let us all know which books you would include in this list.

CBCA Tasmania Executive send all our readers our very best wishes for a happy and peaceful Christmas and for a prosperous and productive 2016. We hope that you find some wonderful summertime reading under your tree.