A look at Icelandic sagas 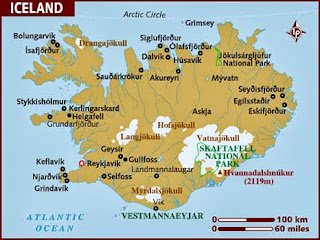 It’s obviously the time for overseas travels. Penny’s blog last week told of her learning French and her use of children’s books to improve her fluency. I am focussing on Iceland.

I am in Canada, on our annual visit to our daughter and grandson, Gabriel, and it’s great to be sharing books in person with him, rather than doing it via Skype. Sharing via Skype is OK but there’s nothing like the close contact brought by snuggling together on the couch with a book.  He loves books and being read to. So much so, that now he’s started kindergarten (Canada’s equivalent to Prep) he says he doesn’t want to learn to read because that will mean people stop reading to him. Nothing we say is yet making him change his mind; we will continue to read aloud with him. It’s just the stories will become more complex and won’t be finished in a sitting. That is a hard concept for a five year old to grasp. Gabriel’s current obsession is with dinosaurs so those are the books, both fiction and non-fiction, we have to read and reread. Harry and the Dinosaurs at the Museum by Ian Whybrow is the one which he wants from all three of his adult readers – 8 to 10 times a day!

Most of my comments this time are about literature for adults which can be read by younger readers too. We travelled to Canada via Iceland and I spent some time re-reading English versions of the Icelandic sagas before we left home. However, they had far more meaning for me once I had an understanding of the landscape they were set in.  I am not a proponent of all young people having to reading myths and legends because I believe it’s only a certain kind of reader who will enjoy them. By and large I don’t enjoy them.  They are complex and fanciful, often with hard-to-remember names, though full of positive outcomes for the thoughtful reader.  But I would encourage people to have a go at the Icelandic sagas because they are such great family stories.

It’s thought that Iceland was settled by Vikings somewhere around the middle of the 9th century AD. The new settlers came to a really harsh land with even shorter summers and longer winters than their original homeland, volcanoes and lava flows and geothermal activity. The sagas are family histories in prose format, describing events from the 10th and 11th centuries but written about two centuries later. They are wonderfully evocative and well-written stories, still very readable and relevant to our modern eyes.  One can imagine that most of the events happened as families struggled and fought to establish their new lives, with death and vengeance prominent themes. Unlike the Greek and Roman myths which can rarely be read literally, the Icelandic sagas show elements of truth and hardship. And most surprisingly many of the Middle Age manuscripts are still in existence.

There are many English language versions of the sagas. There’s a great website (which I used for my reading) devoted to the digital publication of the sagas: http://sagadb.org . This contains all the major extant sagas, many of which are translated into more than one language.  The Saganet website -- http://handrit.is  -- includes images of the original manuscripts.  Fascinating!

http://ebooks.adelaide.edu.au/s/sagas/icelandic/index.html  has several of the more famous sagas available for free download.  If you would prefer to read the sagas in book form, there are many choices, translated over the past several hundreds of years. One of them, which I saw in Icelandic bookshops, was The Sagas of Icelanders. There are also smaller versions containing just one of the sagas, such as the one about Eric the Red or about Grettir the Strong.

Iceland has a very successful publishing industry. Have a look at these two articles if you want to know more about it. Baldur Bjarnason’s (an Icelandic expatriate blogger who lives in UK) opinion in 2011 can be found at www.thebookseller.com/feature/depth-icelands-book-market.html  and a 2013 interview with Alda Sigmundsdottir ( a writer and translator) at http://www.worldliteraturetoday.org/investigating-icelandic-book-flood-qa-alda-sigmundsdottir#

Let me know what you think of the sagas.