Autism, Prime Numbers and Dead Dogs - Maureen's review of The Curious Incident of the Dog in the Night-Time ... at the theatre! 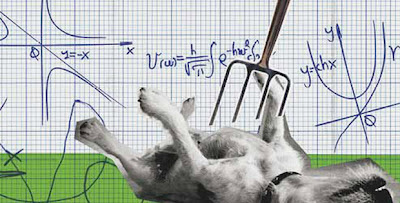 I am lucky enough to have recently spent several weeks in London, over the Olympic Games period, looking after a friend’s flat. It was a great opportunity to visit some of the lesser-known London sights as well as indulge in music and theatre.

One of the most memorable things I saw was the National Theatre’s adaptation, world premiered in late July, of Mark Haddon’s challenging and entertaining The Curious Incident of the Dog in the Night-Time, published in 2003. I loved the book, have very strong memories of it, so if you haven't yet read it I highly recommend it. Critics gave the stage production rave reviews and it became one of my must-sees. The relatively short season was sold out and the only way of getting tickets was queuing at the box-office first thing in the morning. I was lucky to get the last available ticket for the evening performance that particular night and I was so glad that I did so.

Here’s the synopsis of the play taken from the National Theatre’s website (http://www.nationaltheatre.org.uk/shows/the-curious-incident-of-the-dog-in-the-night-time ). Christopher, fifteen years old, stands beside Mrs Shears’ dead dog. It has been speared with a garden fork, it is seven minutes after midnight and Christopher is under suspicion. He records each fact in the book he is writing to solve the mystery of who murdered Wellington. He has an extraordinary brain, exceptional at maths while ill-equipped to interpret everyday life. He has never ventured alone beyond the end of his road, he detests being touched and he distrusts strangers. But his detective work, forbidden by his father, takes him on a frightening journey that upturns his world.

The production was staged in a National Theatre venue with only about 300 seats and performed in the round, so each member of the audience was always close to the action and there was no real ‘front of stage’. Mathematical concepts are an important part of the book’s structure and were carried over to the stage. Seats, which were prime numbers, had an extra envelope attached to them – for interest not participation. The floor was a mathematical grid on which the character Christopher used chalk to emphasise some of his statements and at the end of the play came back on stage to explain a complex concept referred to. I had to keep reminding myself that Luke Treadaway, playing the demanding role of Christopher and on-stage for almost the whole play, did not have Asperger’s Syndrome and that all his behaviours had been learned for the production. He was brilliant. The rest of the cast were also excellent.

Now I am home again, I must go back to re-read the book and remind myself why it made such an impact. The theatre production certainly did.
Posted by CBCA Tasmania at 18:27