Join Lyndon as he considers the underlying inspiration in his current writing that is drawn from animals and the long-held tradition of applying human characteristics to our 'furry' friends. Meet Walter the wombat along with some other familiar characters.

My mother once gave my nan a fridge magnet that stated, “Animals are little people in fur coats.” I think about this as I fill the car with two weeks of food, then drive the winding, wet roads to Cradle Mountain. Thanks to the generosity and kindness of Arts Tasmania and the Tasmanian Parks and Wildlife Service, I am spending the two weeks of school holidays up here as an artist in residence inside the national park. 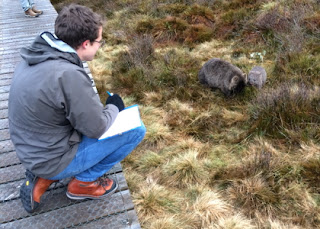 The project is a new book called Wombat Overland. It’s a novel about an old wombat who leaves his burrow one night to discover another of his kind has died in the snow, with a joey still inside her pouch. The only thing she carries is a map to Lake St Clair, with a big red circle at the end of the lake and the word ‘home’ written next to it. He decides to make the long journey to take the child back to its family—a book in which the chapters sequentially match the real-life locations of walkers who take on the track. Yet in writing a story like this, the obvious question arises: How human should my animals be? 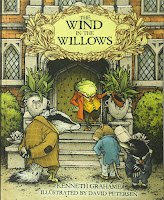 Certainly, children’s literature has a long and well-loved history of personification. The boot of my car is filled with wonderful examples to accompany me on a sabbatical of two weeks without phone or internet. There are surprises, though. Who would have thought, given the recent backlash to the cinematic version of Peter Rabbit and his friends throwing blackberries at the allergic Tom McGregor (who even has to pull out his epi-pen in order to recover), that Beatrix Potter’s The Tale of Mr. Tod might include a badger throwing a hot pot of tea in a fox’s face? In Kenneth Graeme’s gorgeous The Wind in the Willows what is animal and what is human is incredibly murky: Mole has a bust of Queen Victoria in his garden—not a mole version, but the human one, at least according to the original illustrations—and Mr. Toad easily swaps clothes with a human washerwoman, drives a car, and rides a horse! 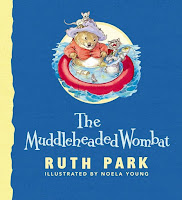 It is fascinating to watch writers make their various decisions. Ruth Park’s Muddle-Headed Wombat (far more affable and lovable than my own version) is identified by the pronoun he, and Tabby the cat as she, while poor old mouse is relegated to the land of it. Dorothy Wall was apparently quite happy to have good ol’ Blinky Bill join the army in an act of patriotism, even if her publisher encouraged her to rip up the first draft and include Blinky as a mascot, rather than an actual solider. Richard Adams’s Watership Down is a little truer to life in its portrayal of animals, yet has as much bloodshed and sadness as any epic tale. Wings of Fire. All effective, all wildly different. Looking at some more modern work, I had great fun with the ‘cheesy’ puns of the Geronimo Stilton series, and the reptilian action and

My brother once told me that if you want to sell a children’s book it should be about fairies or food. I’d add that talking animals couldn’t be too far behind. This isn’t about selling a product, though, it’s about telling a story of love. I love animals acting like people. For my own part, Walter the wombat appears in my mind, in his burrow, in a form that cannot be contested: wrapped up tight in a green coat by the fire with round glasses, holding a photo album in the shape of a leaf and one paw, and a cup of tea in the other.

I can’t help it. After all, he’s not just a wombat. He’s a little person in a fur coat.

Go on, tell me your favourite books from childhood with personified animals in the comments below.

Lyndon Riggall is a writer and teacher intern at Launceston College. You can find him on Twitter @lyndonriggall or at http://lyndonriggall.com. Lyndon will be moderating a number of sessions at the Tamar Valley Writers Festival (https://www.tamarvalleywritersfestival.com.au/) from the 14th to the 16th of September 2018.

Editor's note: I did enjoy Lyndon's closing image of Walter and it instantly brought to mind sharing a cup of tea with Mr Tumnus in The Lion, the Witch and Wardrobe - does a faun count as a furry friend?