This week, Tasmanian author, Julie Hunt, provides a window into her current projects to expand on the ideas presented in KidGlovz. She includes stunning first sketches from the illustrator, Dale Newman, as a foretaste of what is to come. While we wait for these tales to be completed and published, you might like to dip into her newly released title Shine Mountain and revisit the post celebrating the launch of KidGlovz.

I was lucky enough to spend the month of June in sunny Brisbane, courtesy of the May Gibbs Children’s Literature Trust. What a marvellous organisation that is! The trust has three residences, in Canberra, Brisbane and Adelaide and each city hosts two children’s book creators for a month every year. The idea is to support writers and artists by allowing us to spend dedicated time on our projects. 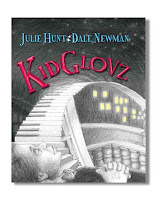 I worked on two books during my Creative Time Fellowship, both adventure fantasy stories for 8–12 year olds and both companion books to my graphic novel KidGlovz, illustrated by Dale Newman. KidGlovz is the story of a musical prodigy, a young boy who learns that much of his talent comes from the pair of gloves he believes he was born wearing. The gloves have the power to amplify whatever qualities are in the person who puts them on. In the next book they appear on the hands of Kid’s best friend, a thief called Shoestring and they enable him to steal impossible things – hopes, dreams, and even somebody’s mind.

Shoestring – the Boy who Walks on Air was conceived as a hybrid novel, part graphic panels and part prose and during my fellowship I worked on a near final draft of the manuscript. My editor at Allen & Unwin had returned the text with suggestions for refining the plot and developing Shoestring’s character. I did this while looking at Dale’s fabulous roughs. Here’s Shoestring with the arch villain, Mistress Adamantine, better known ‘Marm’. 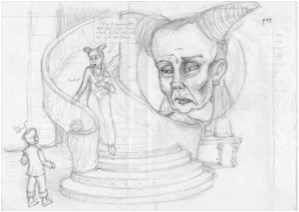 Collaborating with an artist has got to be one of the delights of writing for children! Whenever an email from Dale arrives I dive for the attachment. Here’s one of the settings for the book – Mt Adamantine, the crater of an extinct volcano. No prizes for guessing who lives there. 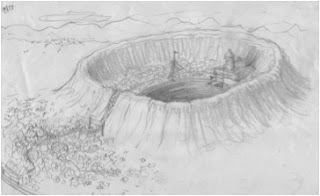 Shoestring – the Boy who Walks on Air, will be published next year. I can’t wait to see the finished artwork.

I spent the second part of my fellowship exploring ideas for the third and final story in the series which has the working title of Sylvie and the House of Fabio Sham. Sylvie is a young girl with a prodigious memory and a quick and curious mind. When the gloves appear on her hands she finds there’s nothing she can’t learn. But sometimes a child can know too much. When Sylvie discovers the secret of life – how to conjure things into existence – she finds herself in trouble. If Sylvie can create life she can take it as well and for a seven-year-old girl this has disastrous consequences.

Many thanks to the May Gibbs Children’s Literature Trust for the hospitality and the generous gift of time. Visit the website for more information about the trust.