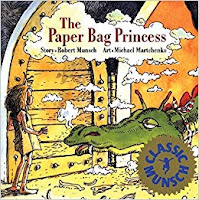 This week Felicity delves into literature that explores differences, from behavioural and physical, to more topical issues around gender identity. There is certainly a book to fit every reader.

In the past, non-stereotypical children’s literature was most likely to be focused on behaviours or physical characteristics associated with males and females: think The Story of Ferdinand (Munro Leaf/Robert Lawson), The Paper Bag Princess (Robert Munsch/Michael Martchenko) and Crusher is Coming (Bob Graham). 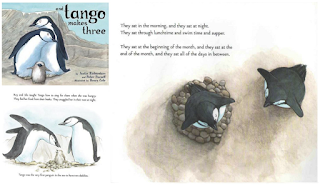 In recent times, the above focus remains, but books about gender stereotypes are becoming more mainstream. It’s hard to believe that it is ten years since And Tango Makes Three (Justin Richardson and Peter Parnell/Henry Cole) about two male penguins, in the New York City Central Park Zoo, who hatched and raised a chick, was published and created a media storm. Red: A crayon’s story (Michael Hall) is also about identity: a blue crayon with a red label that struggles to meet expectations, until being given the permission to be himself.

The Rainbow Book List has been published since 2008. A committee consisting of the Gay, Lesbian, Bisexual, and Transgender Round Table (GLBTRT) and the Social Responsibilities Round Table (SRRT) of the American Library Association (ALA) review titles published in the previous 18 months, and select “quality books with significant and authentic GLBTQ content, which are recommended for people from birth through to eighteen years of age.” (Rainbow Book List, 2018). This provides a good source of books to inform your reading journey.

Many books in this genre (assuming this is an inclusive word to use in this context) have been written by a person with a close association with a gender diverse family member. Alex Gino, one such author, wrote George, the book that as a child, she would like to have been able to read. Carolyn Mackler, a young-adult novelist who lives in Manhattan, gave a copy of George to her 10-year-old son to read. She told him that it was about a transgender child and explained what that meant. After he read it, she asked him what he thought. “I said, ‘If you met George, would you be friends with him?’ ” she recalled. “And he said, ‘Mom, it’s her, and I would be friends with her if she was nice’.”

In the same article, Sam Martin says; “I never saw people like me in movies or books.” (Alter, 2018) These sentiments are echoed by Hannah Gadsby in Nanette (Netflix) when she talks about the introduction to ‘her people’ being the Mardi Gras, and them being ‘busy’. Readers deserve a greater range of gender diverse characters to illustrate what it is to be non-cisgender in our 21st Century world.

You probably have titles on your bookshelves, with gender diverse characters, existing alongside cisgender characters: Captain Underpants (Dav Pilkey), The Perks of Being a Wallflower (Stephen Chobsky) and Better Nate than Ever (Tim Federle).
Australian titles you may wish to explore are The Gender Fairy and A House for Everyone by Jo Hirst, where pronouns such as he, she and they are used, dependent on how the child identifies.