Inspired by Fern Martin’s stunning illustrations in Big Fella Rain, Maureen Mann set out to discover more about this indigenous artist who is also the director of the InhertianceArtDesign Studio. 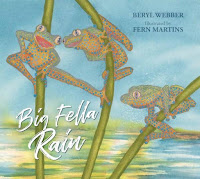 When I was preparing my recent blog on books about rain, I came across some wonderful illustrations by Fern Martins in a book called Big Fella Rain. In this title she captures, using watercolour, the wetness of the landscape during the rains with some of the animals portrayed in the Aboriginal dot painting technique. Take a closer look at illustrations from various titles on the illustrations page of Fern's website.
Having enjoyed this title of Fern’s so much I decided to explore some of her other titles, hoping that her other illustrations spoke to me as successfully. She has co-authored all her stories with indigenous authors from various parts of the country. Fern is a descendant of the Ngarabul people from northern NSW and the Waki Waki of southern Queensland, and was a co-founder in 1988 of Boomalli, the Sydney Aboriginal Artists Collective. 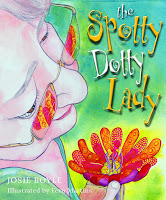 The lonely main character, in response to a mysterious plant growing in her garden, paints dots over everything to such an extent that she involves her neighbourhood in the process, demonstrating the transformative power of nature and friendship. The watercolour illustrations become increasingly vibrant through the book, using varying perspectives, making the ordinary extraordinary, as are the pictures.

Jack watched the goats alone and lonely, occasionally swapping milk for eggs with Mrs Timms. At Christmas he wants to be a part of a family and a quest presents itself: to decorate a magical tree with specific items. Happy ever after … Fern’s bright primary colours are so different from the palette in Spotty Dotty Lady. She portrays Jack and Mrs Timms as ‘real’ people, and there are lots of details about Australian plants and animals.
There are three titles in the Indij Readers collection, all published in 2012, brief retellings of traditional tales from differing parts of Australia. There does not appear to have been as much graphic crafting as for her other books, but that is understandable in brief readers. Haunted Billabong by Clarry Smith; the amusing Goanna, Rising out of the Ashes and Southern Cross the latter two written by Beryl Philip-Carmichael. In each, Fern has a visual focus on the characters, creating individuals while also being able to suggest the landscape backgrounds. 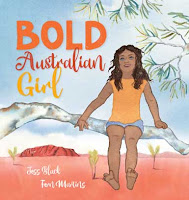 For me, this is one of Fern’s less successful books from an artistic point of view, but her drawings complement the strong story of a nurturing relationship between an indigenous mother and daughter.  The relationship is loving, set within a recognisable Australian landscapes as the girl dreams that her future can be whatever she wants, but the figures are stilted.
The Toast Tree written by Corina Martin, published by Magabala, 2015. 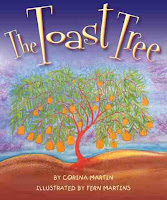 Set in a small dusty town surrounded by the sea, Fern’s illustrations compare earth colours with the brightness of the sea. Grandpa’s imaginary toast tree fires the minds of the two girls and through the illustrations we see details which the verbal text does not supply. What the tree looks like, Grandpa’s days fishing, the magic in a child’s imagination.
In all the books listed, Fern’s extensive use of colour and careful placement on the page is strong and thoughtful, and though I think I read the best one first, there is much to revisit in the other titles. I look forward to exploring future publications.
For a wider exploration of Fern Martin’ artwork, visit her website InheritanceArtDesign.
Do you have a favourite children’s book illustrator? Why not share in the comments section.
Maureen Mann
Retired teacher librarian and avid reader
Posted by CBCA Tasmania at 21:53