After a taste of what was to come last year when Julie Hunt and Dale Newman shared snippets of their current endeavour, it is wonderful to share insights into how the cover for Shoestring, the Boy Who Walks on Air was developed. What an enchanting entry into a world of magic and amazement. 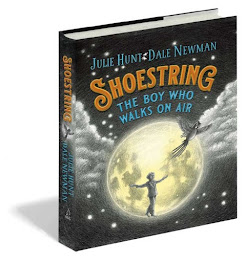 What a joy a cover can be! As a reader and a writer, covers are one of my favourite things and over the years it’s been interesting to see how they come about.

Sometimes the editor gives a detailed brief to the designer (who may not have read the book) explaining the crux of the story and who or what should be in the image. She might suggest a style and include sample book covers as starting points. The brief can be quite specific: ‘A nine-year-old girl. Red hair, one blue eye and one green. Running as if being pursued. Design could be in the fantasy style, with the figure featured within or around a shape (rather than full bleed illustration), and with the setting or background working as a texture.’

I love reading this sort of thing; it’s a glimpse into another world. The designer then mocks up a cover with text and stock images or a rough drawing done in Photoshop, before passing it to the illustrator.

Other times the brief can be short, informal and wide open. My latest book, Shoestring, the Boy Who Walks on Air, illustrated by Dale Newman, was like that. ‘Perhaps an image of Shoe on his invisible tightrope, something inspired by the beautiful aerial-perspective illustrations in the text. Dale, do you think you could sketch up some thumbnails, and we can go from there?’ 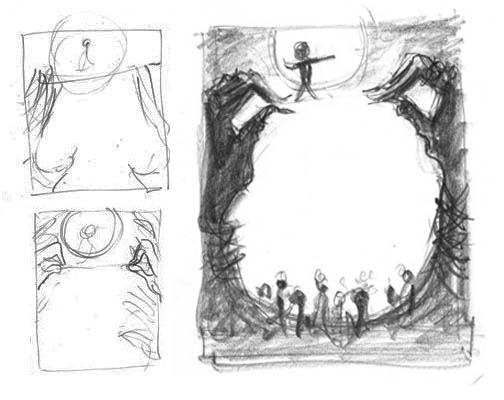 Dale drew an extraordinary thumbnail that seemed to say it all: Shoestring in the sky under a full moon, his life held in the balance by a pair of sinister hands which frame the image. She worked it up and everyone thought the drawing was great – dramatic, theatrical, atmospheric and with plenty of tension. 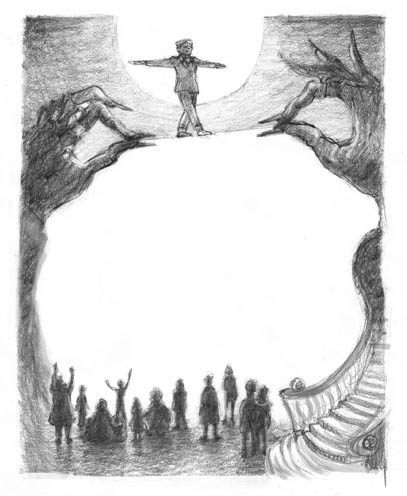 There was only one problem – how to place the text? Jo Hunt, the designer (no relation), literally went around in circles trying to make it fit. Then another idea surfaced – a simple image of a boy walking across the face of the moon. Jo did a mock up using Dale’s character, along with stock moon and clouds. She added white dots to indicate stars.

To tell you the truth at first, I thought it might be a bit too simple, but with Dale’s beautiful rendering, the moon glowed and the clouds behind it became wings or feathers. Shoestring is barefoot, his hands upturned and Metropolis, the self-declared ‘Fabulous Macaw’, is flying triumphantly into the night sky.

Except for the yellow moon, the image is monochromatic, in keeping with the cover of the companion book, KidGlovz – a graphic novel for which Dale was shortlisted for the CBCA Crichton Award for New Illustrators. 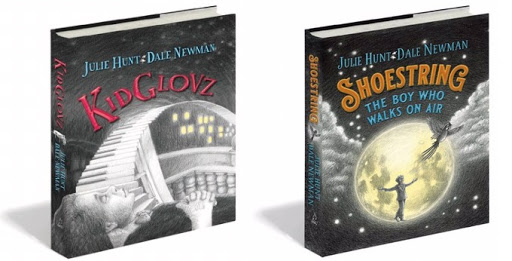 It’s an uplifting image, full of the light fantastic, and it works beautifully with the format of the book – a chunky, heavy, hardback that’s almost square. The moon and Metropolis are gloss laminated (Metropolis wouldn’t have it any other way). And the title—in a typeface reminiscent of 19th century circus posters—fits perfectly.

Thank you so much, Dale, and the team at Allen & Unwin. It’s a delight to hold this book in my hands.

Take a peak at Shoestring: The Boy Who Walks on Air

Editor’s note: Julie is an occasional contributor to our blog. Last year, Julie and Dale participated in The Travelling Workshop visiting Tasmanian schools, and part of their conversations were around the development of Shoestring. There are also posts about her writing craft and the launch of KidGlovz. Spend some time exploring Julie’s creative efforts in her other posts.