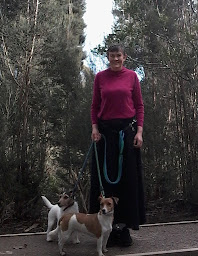 I first met Sally as a visiting author to my school in Launceston some 30 years ago and she continues to write, inspire others to put pen to paper and hit the mark for her young and YA readers. This week Tasmanian author Sally Odgers introduces two of her favourite characters – Pearl and Dooley.

I gave a fair bit of thought to what I might write for the CBCA Tasmania blog. In the end, I decided to tell you about two of my characters. Pearl, the Magical Unicorn, trotted into being a few years ago and continues to forge her way along with her best friends Olive and Tweet. Pear is kind and friendly, with just enough vinegar in her nature to make her human…even though she’s actually a unicorn. When I set out to write about Pearl, I had to cover the fact that she doesn’t have hands. That sounds self-evident, but writers sometimes forget such details. Seriously, no matter who or what your protagonists are, always bear in mind their physical limitations and probabilities. Pearl isn’t especially big for a unicorn but she can’t go for a trip in her friend Olive’s ogre-boat. She just won’t fit. Neither could she turn the pages of a book.

Pearl stars in her own series, published by Scholastic. 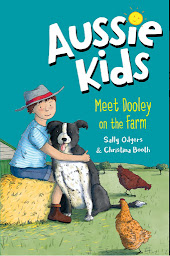 The second character is Dooley. He’s especially dear to my heart because he lives on a farm at the foot of Dooleys Hill in Latrobe, where I grew up. There are sometimes limitations to publishing stories set in Tasmania, (is that somewhere in Africa?) but in this case I was invited to submit a Tasmanian story for the Aussie Kids series. To write Meet Dooley on the Farm, I hied back to my childhood, and to the things my children and grandchildren have enjoyed also. Dooley is a happy-go-lucky boy whose mainlander cousin, Sienna, is coming to stay. Sienna is older, but Dooley has the home ground advantage. A night camping in the barn brings an unexpected challenge, but capable Dooley has it in hand.

The icing on my cake is that Christina Booth did the illustrations! 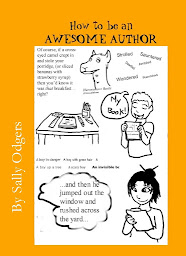 Sally Odgers was born in NW Tasmania and still lives there with her husband and multiple dogs. She started writing in the 1970s and now has over 400 titles published. As well as children’s books, Sally writes YA, crossover, romance, photo verse and how-to books for writers, and holds workshops and author talks. Her manuscript assessment and editing service has been running for around twenty-five years.