Run on Empty or Adapt: Part 1 Publisher and Book Seller

This is the first of two posts that provide insights into the impact of COVID 19 on some of the stakeholders in the publishing industry. Living in the moment as an independent publisher, bookseller and author – Paul Collins returns to share insights and windows into the children’s book trade.

Paul Collins is the publisher at Ford Street Publishing.
He also runs Creative Net Speakers’ Agency. He has written over 140 books, mostly for Australia’s leading publishers including Penguin, HarperCollins and Hachette. His current book, James Gong – The Big Hit, came out in May 2020 from Hybrid Publishers and this interview with the author, by Narelle Harris, provides a great introduction to this awesome tale for primary aged boys.

These are interesting times for many businesses. Some might say adaptation is the key to weathering them. We’re seeing former cafés/bars selling groceries, booksellers delivering books (some by bicycle!) and florists selling vegetables alongside their flowers.

Some businesses can’t adapt. Part of what I do, for example, is running a Speakers’ Agency. I had four literary festivals planned for this year and some fifty presenters booked for Voices on the Coast and other big name festivals around the country, and in schools and libraries. Everything has been cancelled. There is no coming back from that when your client base has shut down. I was to present at both KidLit and the CYA Conference. The latter will go digital later in the year and KidLit has at least shifted its conference to November. However, the good news is that a number of my speakers have stepped up to the mark and virtual workshops are now available.

Luckily for me, my business model is quite diverse. I publish books as Ford Street Publishing and have managed to keep up a writing career, putting out three books in the past three years – two with Scholastic and one with Hybrid Publishing.

However, most businesses encounter cash flow problems somewhere along the line. With Ford Street, every picture book I currently accept comes with an upfront cost. The author and illustrator receive an on-signing advance, the editor and designer also get paid when the book is complete. And there it will sit till the following year before release – so no income from that book for at least twelve months. There is no point in putting out books right now as bookshops are closing daily. My distributor also informed me that many of those who are staying open are holding off purchasing new releases and relying on the stock they already have. It’s no wonder that many major publishers are postponing their lead titles until 2021.

With so many books in the pipeline, I have taken the plunge and committed some of the books I have to publication in September and October. Again, it’s a cash flow decision. If I don’t schedule books for 2020, there will be no income for quite some time.

Good news for Ford Street is that Chris McKimmie’s I NEED a Parrot was shortlisted for the CBCA’s Picture Book of the Year. It seems some people still have budgets as it has back orders of around 800 copies – well below what that figure might have been had it not been for the pandemic. Regardless, it will help Ford Street weather these difficult times. Megan Daley gives it a great rap on her weekly reviews - it's the second of her 5 Fave Books this Week!

And there’s light at the end of the tunnel. It appears that many schools are sending their library books to students at home. Most schools, apparently, aren’t expecting those books back once school resumes. As the schools still have budgets, it makes sense that sales will boom once we’re back to normal.

Another bonus is that online book sales have rocketed. During one recent week I had fourteen books ordered online. At best, Ford Street would normally get around five online sales in a week. Some booksellers are saying their sales have gone through the roof. Whether this trend will continue beyond the pandemic is anyone’s guess. But as a micro press, I hope it does. Having a smaller distributor means many of Ford Street’s new releases don’t make it into the stores. This means no spontaneous sales – if the book isn’t on a shelf, it’s certainly not going to sell. But all of Ford Street’s books are online, so it’s certainly levelled out the playing field to a degree. 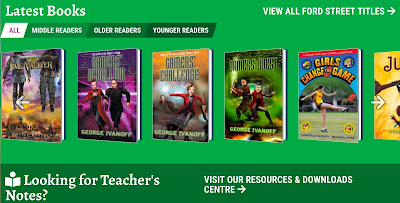 What’s important for all in the book trade is for the public to keep reading and buying books. Take the time to explore your favourite Australian bookshops online and be prepared to spend your dollars locally to keep the industry alive.

Editor’s note: Why not take the time checkout the offerings of Ford St and source some new reading material to entice children at home or as they return to school and the…library! Yay!
Posted by CBCA Tasmania at 17:22