Humour and the Modern Teenager

This week Leanne Rands looks at the lighter side of Young Adult fiction, in Humour and the Modern Teenager from three different perspectives …

Humour can help teenagers navigate life, which is not always easy, simple, or straight-forward. Books that reflect this struggle can indirectly support teenagers as they come to terms with the sensitive issues that concern them, especially those that are too emotionally stressful to deal with directly.
Teenagers enjoy stories that involve sarcasm and sexual references, as nothing is sacred when enjoying a good laugh found in a book. In fiction as in real life, humour can provide the glue for maintaining and developing friendships, empathising with people who live other lives, and providing the opportunity to be honest and outrageous together. The most popular stories reflect the accurate observations of teenager behaviour, attitudes and conversations, often featuring offbeat characters and funny situations, sarcastic or witty dialogue, and a tone of humorous but angst-filled desperation which teenagers appreciate. I have selected 3 examples of humorous books for teenagers.

Beauty Queens Libba Bray
When a plane crashes on a desert island thirteen teen beauty contestants headed for the Miss Teen Dream Pageant are stranded. These ‘princesses’ have to struggle to survive and combat the island’s diabolical inhabitants by working together despite their fierce competitiveness. Even though they have very little food and water, no access to the internet and are fast running out of make-up, they focus on practicing their dance routines in case they are rescued in time for the competition.  The book is a wickedly satirical humorous look at beauty pageants, reality television and teen pop culture as the glamourous castaways journey into the heart of non-exfoliated darkness.

An Abundance of Katherines John Green

Katherine V thought boys were gross
Katherine X just wanted to be friends
Katherine XVIII dumped him in an e-mail
K-19 broke his heart
When it comes to relationships, Colin Singleton's type happens to be girls named Katherine who all dump him. In the wake of this debacle Colin, an anagram-obsessed child prodigy sets off on a road trip with his obese Judge Judy loving friend Hassan. With 10,000 dollars in his pocket and a feral hog on his trail, Colin is on a mission to prove a mathematical theorem he hopes will predict how long a relationship will last and demonstrate his genius. The experience challenges and changes Colin’s views on love, relationships and life as he realizes that his theory can only reveal the past because the future is unpredictable and dynamic. 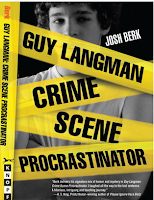 Guy Langman, Crime Scene Procrastinator Josh Berk
Sixteen-year-old Guy, grieving his father’s death, joins a school Forensics Club hoping to find out about his father’s past and meet ‘hot’ girls. Overshadowed by his charismatic father, Guy had become an underachiever with a class clown persona. When he meets Maureen, an ambitious Goth girl, and finds a dead body he and the club members investigate and uncover a secret from his father’s past. This is a sardonic narrative with wisecracking humour, teenager insecurity and hilarious banter between Guy and best friends Anoop and Maureen.