Please sir I want some more! 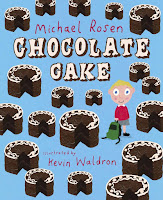 Cake that is, not just any kind of food! We’re fortunately not like Oliver Twist and most of us have a wonderful surfeit of good food to eat. Cake for many of us – young and old alike – is an important part of our lives. And so it is in books. I am again temporarily back in Canada, so my suggestions have a North American flavour, though not exclusively.

Chocolate Cake by Michael Rosen and Keith Waldron.
Told in the first person, Rosen describes his young self’s midnight feast in the kitchen when he thinks he’ll just taste a crumb but ends up eating all the remaining cake as he tries to ‘tidy it up’. Quiet Rosen humour brings out the consequences of his actions and shows the need for honesty when found out. Waldron’s illustrations are a wonderful complement to the verbal text. 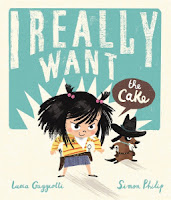 I Really Want the Cake by Simon Philip and Lucia Gaggiotti.
Mum’s note says not to eat it … but how can you resist such a wonderful creation? The rhymes are part of the fun, and we see how the temptations take over until the narrator has to find a replacement cake. How hard can that be? Gaggiotti’s illustrations reflect the child’s increasing obsession. Great fun. 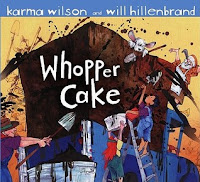 Whopper Cake by Karma Wilson and Will Hillenbrand

Grandad only bakes whopper cakes but this one is over the top and includes 86 eggs, bags of flour and sugar, mixed in the back of a pickup truck and then crazily baked there too on a trip to town. Totally preposterous and great fun, it’s a book made even better by a realistic recipe at the back.

Mitzi Tulane Pre-School Detective in What’s that smell? and The Secret Ingredient by Lauren McLaughlin and Debbie Ridpath Ohi 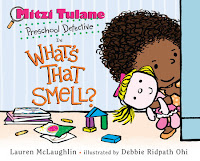 Mitzi is a three-year-old detective, with a slightly older voice but it works. She uses her senses to investigate things happening in the house. What’s That Smell? is about working out it is her birthday and it’s her cake which has been baked. There’s a small weakness for me in this story in that Mitzi doesn’t seem to know that she’s about to turn 4 but otherwise it works. Secret Ingredient is the investigation Mitzi and her friend Max undertake when Dad bakes muffins and Max suspects that Dad’s added vegetables to the mixture. Great use of science and scientific terms. Ohi’s illustrations are from a child’s perspective. 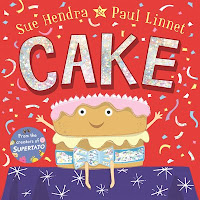 Cake by Sue Hendra and Paul Linnet
Cake is excited that he has been invited to a birthday party but loses some of his enthusiasm when the candles on his head begin to burn! The humour comes from the reader’s understanding of the unfolding events. 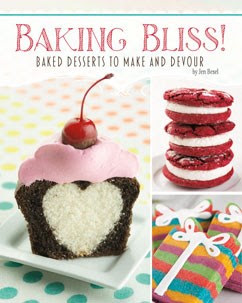 Though this is produced for the North American market it does have a conversion chart for US to metric weights, measures and temperatures. Many of the recipes use packet cake mixes which can be found all over the world, and there are some scrumptious looking recipes, not only cakes. Pity there isn’t an advisory note about children needing supervision when using the oven or cooktop. 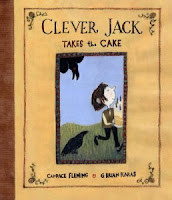 Jack wants to go to the princess’s party but has nothing to give her, until he sells the family’s bare possessions (without parental agreement) to make a cake. On the way he must bargain with the cake to bypass the obstacles in his way. He arrives without anything to give the princess but tells her the story instead. A fairy-tale picture book for early childhood about bargaining, bullying, a quest and determination.

Splat the Cat Takes the Cake by Amy Hsu Lin
I love Splat the Cat and this is no exception though it probably appeals more to young readers than to their parents. Splat enters a baking competition to try to win a replacement television after the family television set broke. Typically Splat doesn’t go about it the easy way.

And let’s not forget some old favourites: 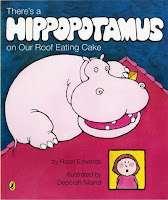 It was great to re-read this after an absence of some years, and it’s stood the test of time. The hippo on the roof can do all the things which the child herself can’t do. Great view of family dynamics and imaginary friendships.

A Piece of Cake by Jill Murphy
All the members of the Large family have been trying to lose weight and become fitter, but Granny sends a cake as a present and they all decide to break their diets. This classic picture book may not be sending the best health messages to children, but it would be a good starting point for discussion.

I hope you have found some new titles here. Which are your favourite books about cakes and baking? Which recipe book works for you and your family?