Leanne presents a fascinating overview of biographical graphic novels that present a range of perspectives on this sub-genre.
Graphic novels, as all high school teachers and librarians know, are very popular with many teenage readers. These novels tell stories through a combination of prose and pictures or “sequential art”.
When cartoonist Art Spiegelman received a Pulitzer Prize in 1992 for Maus, his graphic memoir about the Holocaust, his work achieved critical attention and elevated the status of this literary genre. Over recent years other memoirists have used the graphic novel format to chronicle their lives and the lives of others, sometimes combining their artwork with photos, journal entries, and other real-life mementos.
Graphic novels reflect the modern propensity to digitally share our lives through social media, enhanced through the merging of text and visuals.
'Adding visual elements to a memoir allows readers intimacy with the author that is impossible to achieve with words alone. We get to see through their eyes, to feel what they felt, and many authors exploit that perspective to showcase their particular distorted worldview — anxieties can be personified and magnified, or small kindnesses wreathed in heroism.' (Molly Lynch, 2015, Mashable Australia)
These elements, combined with a fast moving and engaging plot, explain the resurgence and growing popularity of graphic novel memoirs.  The following examples present a range of compelling topics in a creative style that will be entertaining and enlightening for teenagers (and many adults too).

Persepolis: The Story of a Childhood  by Marjane Satrapi
Marjane was raised in Tehran, the daughter of Marxist activists. She witnessed the Islamic Revolution of 1979 and lived with the many contradictions of daily life in Iran. Satrapi’s story is a wise and gripping account of a precocious childhood impacted by a tumultuous chapter in her country’s history. 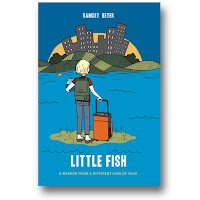 Little Fish: A Memoir from a Different Kind of Year  by Ramsey Beyer
For the first 18 years of her life, Ramsey Beyer lived in “a tiny little farm town called Paw Paw.” A lifelong artist and punk music aficionado, she left home to attend art school in Baltimore and experienced a blinding flash of culture shock. She chronicles her first year of college through a collection of pictures, journal entries, and lists, which helps her to redefine her concept of home.

Hyperbole and a Half :Unfortunate Situations, Flawed Coping Mechanisms, Mayhem, and Other Things that Happened by Allie Brosh
Fans of Allie Brosh’s wildly popular blog love her honest portrayal of living with depression and dogs as a recluse in her bedroom in Bend, Oregon. The book consists of brief vignettes and comic drawings about her life as she shares her struggles, triumphs, and everyday observations. In Bill Gates blog (gatesnotes) he describes her style of humour as; “funny and smart as hell … Her timing and tone are consistently spot on. And so is her artwork. I’m amazed at how expressive and effective her intentionally crude drawings are.

Tomboy   by Liz Prince   Liz Prince was born an utterly relatable tomboy, and from the time she was old enough to form an opinion she rejected traditional gender roles and all things ‘girlie’. A cross-country move when she’s six results in her being subjected to ostracism and bullying that lasts into her teens and is depicted through simple black line drawings. But, when she meets a group of friends who celebrate their individuality and accept her as she is, she finds the sense of community she’s been missing. This memoir about navigating the challenges of ‘growing up’ is funny, heartbreaking and poignant.

This beatifically illustrated memoir is based on the life of Stan Lee, the master of the Silver Age of Comics and creative force behind such legendary characters as Spider-man, the Incredible Hulk, and the Fantastic Four. This memoir tells the history of comic books, his 75-year career with Marvel and pays tribute to the great artists he collaborated with.  It is funny, touching, and discrete with a balance of egotism and unexpected humility.

This is the memoir of one woman who joined the campaign for equal rights for women during a tumultuous period of modern British history. Sally Heathcote and her collaborators give the reader an insight into the pivotal events, historical characters and the violence and hardship they endured for their cause. The book suitable for older teenagers.