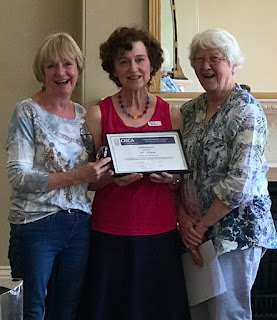 Members attending the 2017 CBCA Tasmania Annual General Meeting acknowledged and celebrated the untiring dedication of Nella Pickup to the organisation.

Nella Pickup has given unstinting service to The Children’s Book Council of Australia, Tasmanian Branch (Inc) for more than ten years. Nella was elected Secretary in 2007 and served in that capacity for nine years. As the branch membership was relatively small and the Executive minute, Nella nobly took on a multitude of other roles, including Minutes Secretary, Archives Officer, overseeing the CBCA (Tas) Blog roster and its production, contributing to the Blog and newsletter, and supporting Richard as President. The number of trips they made up and down the Midlands Highway does not bear contemplation!
Nella’s organisational skills are impressive and she brought diligence and tenacity to convening events that kept the branch visible and promoted literature for children and young people. In 2011 with Carol Fuller and Penny Goldsworthy she wrote and published the booklet Books to keep kids reading, and then later was instrumental in the development of a series of five reading guides for parents, built around that booklet. In the process, Nella cultivated the arcane art of writing grant applications! She was an active contributor to the planning and enacting of events in the Year of Celebrating Nan Chauncy in 2015 and the significant Hidden Stories events in 2016.
Most recently, Nella willingly took on responsibility for the production of the excellent Book of The Year Awards ceremony at Government House, Tasmania. Nella liaised between CBCA and the personnel there. She ensured that the program ran smoothly with just the right amount of formality, but also with friendliness and due respect for the children and young people that Children’s Book Week is all about.
Nella is a dedicated bibliophile. She knows an enormous amount about literature for children and young people and keeps her knowledge current by reading books and reviews and investing her personal time and money to attend national and international conferences focused on the field. As Dr Robin Morrow notes, Nella ‘has been, and continues to be, an active and contributing member of IBBY Australia, particularly as a member of selection panels for awards, where her wide-ranging and deep knowledge is keenly appreciated’.
As a librarian, Nella eagerly held public events to promote literature and literacy, authors and the fun of reading. As Clive Tilsley comments, Nella ‘retrained later to take on new skills as a retailer, selling books in that role, with the same passion and commitment to quality and matching the book to the prospective reader’. Nella’s particular expertise in non-fiction material was recognised by her selection as a National Judge for the Eve Pownall Award in 2003-2004.

CBCA, as a volunteer organisation, absolutely relies on the efforts, enormous hard work and goodwill of community-minded individuals such as Nella. Together with other eminent contributors, including Dr Robin Morrow (AM) and Clive Tilsley, Patsy Jones and Jenni Connor enthusiastically propose Nella Pickup for Life Membership of CBCA (Tas).