Enter Cello – A fantasy world with a difference

This week, discover the fantasy word of Cello created by young adult author Jaclyn Moriarty. Jackie deftly shares her love of this trilogy and provides plenty of hooks as she details the nuances of an alternative world and the trials and tribulations of teenagers displaced between Cello and Earth. 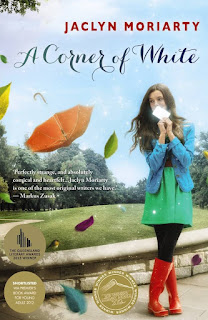 The ability of an author to create a world that captures the imagination of the reader is a key ingredient in fantasy fiction, and it is the world of Cello which is the real star of Jaclyn Moriarty’s Colours of Madeleine Trilogy. The Kingdom of Cello provides a rich backdrop for the characters’ struggles to return the missing royal family to Cello before their absence is discovered and is a major strength of the series.

Although the idea of a world linked to our own world is not new, the world of Cello is distinctly original and very attractive. What reader wouldn’t love to experience the Lake of Spells (only accessible to children no older than sixteen) and fish for the many spells there, or to visit the Cat Walk where cats of all sizes and species from all over the Kingdom gather to walk in the evening? The revelation that Cellians can be identified by a spray of colours which is visible on their inner elbow when lemon juice is applied is an appealing idea especially when you realise that Cellians transported to our world lose their memories of their former lives and have no idea that they are in fact from another world.  The Butterfly Child, Accidental Pilots and other Cellian oddities all add an element of magic and possibility to the world.

The provinces of Cello are all extremely different to each other as well as to our world. The technology minded Jagged Edgians are in stark contrast to the traditionally minded people of Old Quainte with their unusual and convoluted expressions. These differences add another dimension to the teenage themes explored in the books as characters see the world from totally different viewpoints depending on where they live– Keira from Jagged Edge sees the importance of endings while Elliott from the Farms needs beginnings.
Cello experiences Colour attacks and a system of warning bells has been put in place to keep people safe. Some colours can wound or even kill. Others can affect mood or perception. The importance of these colours and the Cello, to both Cello and our own world, revealed in the ending of the third book is plausible and resonates with current environmental theories.

Readers of Moriarty’s Ashbury/Brookfield novels will recognise her skill at supplementing her storytelling prose with letters, newspaper articles and extracts from the extremely irritating T.I. Candle’s guidebook. Often these play a key role in conveying information that will be essential to later story developments.

Comprising the novels A Corner of White, The Cracks in the Kingdom and A Tangle of Gold, the story begins with a girl in our world discovering a message from Cello in a broken parking meter. The teenage characters at the centre of the story both in Cello and our world experience usual teenage issues often amidst absent or disappointing parents. Finding a place where you feel you can fit in, as well as establishing your true identity, are key concerns. Discovering which cause is worth your support is not as easy as it may at first appear and may put you at odds with your friends.

If you haven’t read this series, track it down – you won’t be disappointed.