Patsy has found some gems on her bookshelf and shares ‘six of the best’ picture books worthy of hunting out – for both revisiting and discovery purposes.
I have recently attempted to clear out some of my bookshelves – a difficult task indeed. I noted the other day that there are many picture books in my remaining collection, and had a look again through them all. Picture books give us such great opportunities to share enjoyment with a child, to initiate a conversation, to expand a vocabulary, to develop empathy through imagination and discussion….

I decided to identify the half-dozen or so which I remember experiencing, with most pleasure, with my grandchildren – and that was difficult enough!  But here they are – I wonder if any of them are new to you? 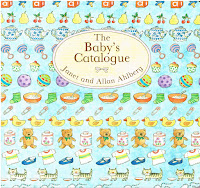 Janet andAllan Ahlberg’s The Baby’s Catalogue (it’s an oldie – published 1982) is the real beginner’s book in my half-dozen. There is very little text but many charming pictures of the people and objects that will surround an infant; and lots of opportunity for pointing to objects, and practising speech. And sorting out and identifying the five different families will be an enjoyable puzzle for toddlers and pre-schoolers.

Mo Willems’ series Elephant and Piggie (much more enjoyable and useful than the pigeon, I think) has charming pictures which illustrate a great range of emotions; there is not much text but its varied font sizes encourage voice variety when reading aloud. Try one like There is a Bird on Your Head (published 2008) – you’ll love it, as will pre-readers and those in lower primary. I haven’t seen this series very much in school libraries, but was very pleased to see a set in the Junior Library at Fahan when I was there for Readers’ Cup this year.

The first Emily Gravett book I saw was Wolves (published 2005) and this had immediate appeal to me as a librarian – the rabbit is reading a book from the West Bucks Public Burrowing Library; the book has no barcode, only a pocket for the card and a date stamp to show when it’s due back. I suppose most children might need some explanation of these aspects these days! The two parallel stories are well supported by the clever illustrations, but I think this is a book for an older child – possibly frightening to little ones. 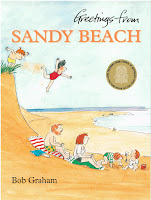 Of course Bob Graham has to get a mention, and I have been unable to decide which is my real favourite - Greetings from Sandy Beach (published 1990) or Crusher is Coming! (published 1987). There’s so much for the older child, and the adult, to enjoy in these. Just a line or two of text on each page, so the reluctant reader may find them approachable, and the illustrations magnificently repay careful perusal and discussion, as do the family dynamics.

My last two were translated into English and might be hard for you to find.  The Fly: How a Perfect Day Turned into a Nightmare (written and illustrated by Gusti, first published in Mexico in 2005) turned up on a trolley of new books in what was then the State Library – I don’t know who the marvellous person was who ordered copies of it, but it was immediately very popular with upper primary students (and others!).

I don’t know where A Cultivated Wolf by Pascal Biet was first published in 1998 or in what language, but it came out in English in 1999. It was quoted in an article on reading – the Wolf ‘read with confidence and passion’. How could I not track that book down! All my grandchildren have enjoyed it with me, and I can still find interest in it.

What would you choose as your best six picture books? Perhaps, as I did, you’d find six was not enough…..