Earlier this year, Nella posted her personal reading list for the year with some alternative and varied selection criteria. She continues to challenge and encourage us to read outside our comfort zones and broaden our horizons. If you can't identify a title for each category then read on for some tasters from Nella's selections. There are some excellent leads for  further great reads from early childhood through to older teens to cap off the year. Are you up to the challenge?

First book in a series
Six of Crows Leigh Bardugo Orion
Nominated for the CILIP Carnegie Medal 2017. I have a love-hate relationship with series books; thankfully this is part of a duology although I may be tempted by the other books set in the Grishaverse.
Criminal prodigy Kaz Brekker is offered a chance at a deadly heist that could make him rich beyond his wildest dreams - but he can't pull it off alone. Chapters are told from the differing POV of all six heist team members. 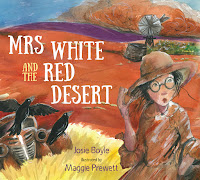 
When a group of desert children invite their school teacher, Mrs White, home for dinner to show her why their homework is always grubby, no-one expects what is to come!

YA with no romance
You Don’t Even Know Sue Lawson Black Dog (2013)
Alex is the misfit of a bullying family. He prefers water-polo to rowing; he loves his little sister Mia. Through random flashbacks, we learn how and why Alex  is in hospital recovering from an accident. Heartbreakingly real. 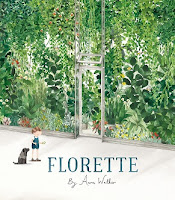 
Florette Anna Walker Viking
Mae moves from a house with a garden into a city apartment surrounded by cobblestones. Outside Florette, a florist shop, Mae finds a tiny plant growing from a crack between the path and the front wall of the shop. Mae takes it home, plants it in a jar. This is the beginning of Mae’s new garden. 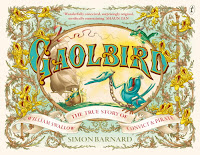 Set in Tasmania
Gaolbird: The True Story of William Swallow Convict & Pirate Simon Barnard Text Publishing
Fantastic story that deserves to be told - truth really is stranger than fiction. William Walker aka William Swallow was an English convict taken to ‘the far end of the earth’, Van Diemen’s Land, in the 1820s...three times.  Illustrated in exaggerated cartoon style.

On your TBR pile

Everything Leads to You Nina LaCour Penguin Random House
Emi Price is a talented young set designer; she finds a mysterious letter at an estate sale, and it sends her chasing down the loose ends of a movie icon’s hidden life. And along the way, she finds Ava.

Award winner
Winner Aurealis Awards - Best Children's Fiction 2016
When the Lyrebird Calls Kim Kane Allen & Unwin
While helping her grandmother, Madeleine finds a pair of shoes in a hidden compartment. Wearing these shoes while a lyrebird calls in an old grotto she timeslips to Lyrebird Muse, the grand home of the Williamson family just prior to the Federation of Australia.

Would make a great movie
Mr Romanov’s garden in the sky Robert Newton Penguin
Lexie lives in a ‘Commission’ apartment, with her junkie mother. Lexie remembers better times with her father —games of pretend camping, taken seriously with map reading and with Lexie given the choice of location (which is always Surfers Paradise). Other residents include the Creeper, an elderly man with a rooftop garden (Mr Romanov) and know-it-all Davey Goodman. The three travel to Surfers Paradise pursued by police.  Sentimental and compelling
400 + pages


At 416 pages, this just meets the criteria.  Jennifer E Smith’s YA novels (she also writes middle grade books) are heart-warming and generally about first love.  Alice buys her best friend Teddy a lottery ticket for his 18th birthday. He wins. A story of loss, death and Alice’s need to live up to her perceptions of her parents’ selflessness.


Nella Pickup
Avid reader (and inspiration to us all to...keep on reading)

From the editor: Why not share your alternative suggestions. Under the First in a Series category I have recently read Tokens and Omens by Jeri Baird and am eagerly awaiting the sequel - out next month.
Posted by CBCA Tasmania at 23:36