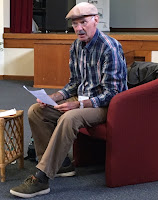 Inspired by a session with Justin D'Ath during the Tamar Valley Writer's Festival this
past weekend, author Johanna Baker-Dowdell brings us some insights shared by Justin.

What if you rode a roller coaster over and over again? What if there were no animals left in the world? What if twins swapped bodies? What if…?

Children’s author Justin D’Ath captivated his young audience at the Tamar Valley Writers Festival last weekend (March 18-20) by making them think about all the wild possibilities for stories their imaginations could dream up. I took both my sons to this session and after hearing Justin speak Mr 7 left thinking about a story in which a disastrous tsunami had struck.

Justin’s audience loved the story behind his surname (his great grandfather made the sensible decision to change it from “Death” to “D’Ath” when it didn’t go so well with his profession as a doctor). And how he left the seminary on a motorbike one dark night with just the clothes he had on and $14, riding through the night and the next day until he ran out of petrol.

With 50 books to his name now, it is obvious Justin is a prolific writer, however he came to his craft almost by accident. Justin travelled around Australia on his motorbike for two years, stopping in a new place every time his money ran out and picking up odd jobs like being a farmhand or working in a sugar mill. He joined the library in every town he stopped at, which meant Justin had access to books and magazines. It was during one of these library visits that Justin started drawing comic strips for a motorbike magazine and soon he was writing articles for the same publication. By the time he was a father reading his children stories before bed, writing has risen to the forefront of his mind.

Freely admitting authors are, “nasty people,” Justin explains his job is to, ”create characters and give them problems”. Some of his characters have to solve 40 problems within one book! What a life he must have in his Queenscliffe home dreaming up problem after problem for his characters while staring out at Port Philip.

What would your ‘what if’ be? Or do you have a series of what ifs?