How can collecting cards support kids reading and love of books? Find out in Penny's post as she intertwines disparate aspects of a personal passion - prehistoric times!

I write freelance educational articles for a number of magazines on the mainland. One of the articles for which I am commissioned in 2016 is for an issue about Prehistoric Times. I pitched an article about Ice Age Mammals as I had enjoyed a fascinating 3D movie at the Smithsonian in Washington DC earlier this year about this very topic.

What I didn't realise is that when this particular issue comes out in 2016, the fifth instalment of the Ice Age movies is also released. I had never seen the movies so I borrowed them from a friend and watched the first four. I admit I'm now a huge fan and coincidentally two of the animals I chose to pitch about are the mammoth and sabre-tooth tiger! 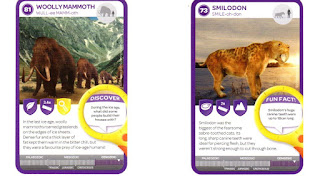 But what has this to do with children's books? Well, some weeks ago one of our major supermarket chains began yet another card collection campaign, this time called Ancient Animals. As I love anything ancient, I began to collect the cards each time I shopped at the supermarket until eventually I had a full set.

Of course then I had to buy the Activity and Collector's Album in which to put the cards. And now I have the most wonderful resource - a book full of information that is both educational and entertaining. And I even have cards for the Smilodon (the largest of the sabre-tooth cats) and the Woolly Mammoth.

It is encouraging to see that one of our largest retailers is promoting education for kids - and in book form - not an app or a website in sight!
And its exciting for someone like me to relive the joy of card collecting and learn something along the way.