For the past 12 years I have written non-fiction articles for Australia's leading children's school and educational magazines.

My passion is history and the articles, for children aged 8-14, range from the dinosaur tracks of Lark Quarry near Winton – to the world's first lighthouse, Pharos of Alexandria – to Orson Welles' 1938 broadcast of H G Wells' The War of the Worlds. 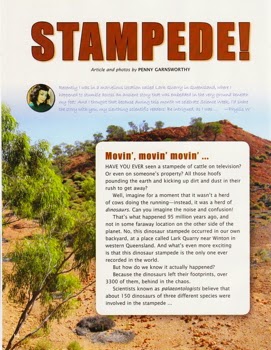 Over the centuries, young people have found themselves in amazing and often unthinkable situations. They have also made incredible discoveries. I love to research and write about history. And as much as I want to see children engage in history, I want to see them engage with other children who feature in that history.

So, I have written about the young Tutankhamen and the mystery of his death; a boy named YingZheng who became king at the age of 13 and later constructed the
Terracotta Army; and a young shepherd boy named Benezet who believed he received a message from God and went on to build the Pont d'Avignon. My next article is about the famous Lascaux Cave in France, where in 1940, four teenagers discovered nearly 2,000 paintings dating back to 15,000BC.

There is so much value in history. There are still amazing discoveries to be made and lessons to be learned. Making history interesting and inclusive for our young people can not only help build their knowledge and awareness, it will ensure they continue our exploration into the future.