How many have we got right? Guessing the Short List Part 2 by Nella and Maureen

Just before the Caldecott short list was announced in January – and sadly we in Australia often miss celebrating these wonderful books – Phil and Erin Stead (authors & illustrators themselves) created a list of their own favourites, much as Nella and Maureen are doing for the CBCA shortlists. Their blog is often thoughtful and thought-provoking so you might like to have a browse. In the same way as it was last week, you’ll find the link at the bottom of this current blog.
To paraphrase part of Phil’s blog, Nella and Maureen are trying to share some of the 2012 Australian books for children and young adults which had an impact on them. Not all of them will appeal to all people, and so we expect some disagreement from our readers. In the same way, we are likely to disagree with the CBCA judges’ decisions. But it won’t take away our confidence in the process the judges go through. It won’t diminish the power of the books we have included or the ones the judges choose. 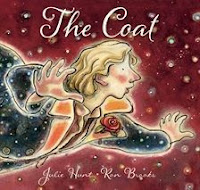 So now to our choices this week, starting with Younger Readers. This is the category which always has the largest number of entries – 170 YR entries for books published in 2012 – so there was lots of competition.
Younger Readers
Anna Branford & Sarah Davis
Violet Mackerel’s Personal Space (Walker)
This is the 4th in the series about Violet Mackerel. The story and themes are a little more complex than previous titles, in that they deal with the emotions of other people. There’s also the unsettling feelings brought on by Mum’s new marriage and moving house. Violet’s voice will appeal to young girls as will her quirky and enthusiastic character.
Elizabeth Fensham
Matty and Bill for Keeps (UQP)
The adventures of Matty and Bill continue – helping a visiting English boy escape Isabelle Farquay-Jones, ensuring Bill’s dad Troy isn’t caught up in illegal activities and learning secret cultural practices. A warm story about friendship and growing up.
Anna Fienberg & Stephen King
Figaro and Rumba and the Crocodile Cafe (Allen & Unwin)
A fun picture book in six chapters. Figaro the dog, prone to hypochondria & dramatics, and Rumba, the dancing singing cat from Cuba, become caught up in a cat-napping adventure when they ride the Very Fast Train.
Anna Fienberg
Louis beside himself (Allen & Unwin)

13 year old Louis and his sister Rosie are being brought up by their loving Dad. Mum has died.  Louis’s sports mad dad is not sympathetic to his son’s love of reading and his passionate interest in words.  Louis supports his friends who are having difficulties. Fast paced and humorous.
Jackie French
Pennies for Hitler (Harper Collins)
Georg(e) is smuggled out from Nazi Germany via England, and eventually reaches Australia. On the way he has to cope with enormous changes in his speech, location and family. French’s story is slow paced but well-researched.

Morris Gleitzman
After (Penguin)
Continues Felix's adventures in World War Two, where he faces perhaps his greatest challenge - to reconcile hatred and healing and to find hope when he's lost almost everything.

Sonya Hartnett
The Children of the King (Penguin)
Hartnett, with her trademark beautiful writing, combines children evacuated from World War 2 London with the history of Richard III and the princes in the tower.  There are great insights into the psychology of young people and strong characterisation. Readers may need to be encouraged to see beyond the hardback presentation and bland cover.

The Silver Door & The Third Door (Omnibus)
Further adventures of Rye and Sonia in the world beyond the Wall of Weld.

Lian Tanner
The Keepers : Book 3 : Path of the Beasts (Allen & Unwin)
A stunning finish to this wonderful trilogy.

Picture Book:
This is Maureen’s favourite category so she found it hard to choose just a few titles, and because of that has probably whittled it down further than it needs to be! There is a change of rules this year for the BOTY Awards. No title can be listed in more than one fiction category, so there are books here which the judges may consider in Early Childhood.
Suzanne Gervay and Anna Pignataro 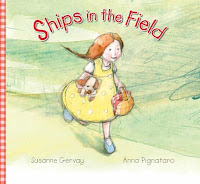 Ships in the Field (Ford Street)
This is a deceptively multi-layered book which deserves repeated readings. The family is making a new home after the devastation of escaping from the war, though the memories continue to haunt them all. Their hope for the future are the fields where the ‘ships’ graze, and the place that brings them new life. 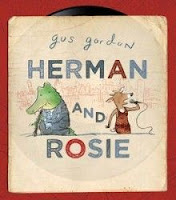 Gus Gordon
Herman & Rosie (Penguin)
A lonely alligator and a deer are brought together by music. Inside the enticing cover are detailed illustrations, wonderfully quirky characters, and imaginative use of the broad range of different media used. A celebration of music and friendship.

Julie Hunt & Ron Brooks
The Coat (Allen & Unwin)
A magic coat transforms a downtrodden man.  At first, there is no colour, reflecting the dejection of both man and coat; colour seeps in, becoming a deep rich wash of colour as the man finds friendship and self assuredness.
Meg McKinlay & Kyle Hughes-Odgers
Ten Tiny Things 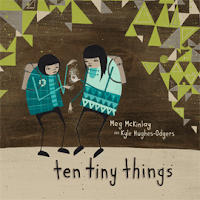 As two children are forced to walk to school, they become aware of the wonder of the world.  The stylised and other-worldly illustrations are earthy tones of browns, greens and blues –cool despite the hot weather the children are experiencing.

Madeleine Meyer
Carpet (Windy Hollow)
Meyer presents a biography of a carpet from its creation, through its life stages to its eventual recycling.  A beautiful book about the cycles of life.
Tohby Riddle
Unforgotten (Allen & Unwin)
The illustrations, on black paper, are a mixture of full page photographic collages and comic strips reminiscent of film stills.  The location is anywhere and everywhere. The people, some with statue heads, others hand drawn, are from differing times and places.  New buildings reflect older ones. This is a picture book for the older reader, dark and gritty yet haunting and thought-provoking.
Alison Reynolds and Heath McKenzie
A Year With Marmalade (Five Mile Press)
When Maddy has to go away for a year, she leaves her cat with Ella. The progress of the year is shown through the changing seasons, in the pen, ink and watercolour drawings but the reader also sees old and new friendships and comes to understand that change can be a good thing.
Anna Walker
Peggy (Scholastic)
A brave hen sets off from her snug roost on an unexpected big adventure into the big city.  The muted illustrations, in a variety of media, make great use of the page though often allow for a light-hearted giggle.
Oscar Wilde & Ritva Voutila
The Selfish Giant (Allen & Unwin)
The rules allow for a retelling, so long as the changes are obvious. This richly illustrated book should be on everyone’s long list. The stunning double-page oil paintings are richly detailed –perfect for this allegorical story. The text reflects the style and punctuation of the original.
Notables:
Sean E Avery All Monkeys Love Bananas  (Fremantle Press)
Nick Bland and Stephen Michael King The Magnificent Tree (Scholastic)
Gary Crew & Ross Watkins The Boy Who Grew into a Tree  (Penguin)
Libby Hathorn & Bruce Whatley A Boy Like Me  (HarperCollins)
Andrew King and Benjamin Johnston Engibear’s Dream (Little Steps)
Stephen Michael King A Bear and a Tree  (Penguin)
Danny Parker & Matt Ottley Tree: A little Story About Big Things (Hardie Grant)
Judy Paulson Baby Tawnies  (Random House)
Judith Rossell Oliver (Harper Collin)
Colin Thompson and Sarah Davis Fearless in Love (Harper Collin)

So, what did you think of our lists? Which of your favourites have we missed? And I wonder what the judges will have chosen. We now only have to wait till tomorrow, April 9th, to find out. The Short Lists will be announced in Canberra at midday. The lists will be available online from www.cbca.org.au but don’t be too precipitate, so that the site doesn’t crash from overuse.

Phil and Erin Stead’s blog about their Caldecott choices can be found at http://philipstead.com/2013/01/22/announcing-the-4th-annual-phildecott-and-steadbery-awards/
It’s interesting to compare their list with the official result.