From scientist to children’s book illustrator 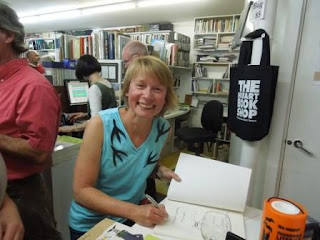 Hobart artist Gay McKinnon recently launched her first book as illustrator, ‘The Smallest Carbon Footprint in the Land and other eco-tales’ by Anne Morgan.  Gay has a PhD in eucalypt genetics and worked for over twenty years as a biochemist, organic chemist and molecular geneticist before changing careers in 2009. She talks about the switch from science to children’s book illustration and the hurdles along the way.
From the age of six, I knew that I wanted to illustrate children’s books.  My grandmother had a large collection of classic illustrated books dating back to the early 20th century, and I learnt to draw by copying them and sketching the people around me.  Growing up in rural Queensland, I fantasised that one day my talent would be discovered and I’d become the modern day equivalent of Edmund Dulac.
No magic carpet appeared to whisk me into my chosen career.  In those pre-internet days, I could find no information about such an obscure profession, and lacked even the chance to study art to matriculation level.  Women everywhere were being liberated, and entering male-dominated careers was the key to independence.  High school guidance officers snorted at the mention of a career in the arts.  I studied a rigid curriculum of maths, physics, and chemistry, with the strange addition of typing – arguably the most useful skill I ever mastered.  On finishing school I resisted taking a highly structured occupational degree and chose science, a qualification that allowed me to work with considerable freedom on a series of projects and write and publish papers.
My life as an artist went on in the background with study, exhibitions, a part-time glass studio and finally teaching.  By 2008, I was lecturing part-time in studio glass in Launceston while working as a research-only science academic in Hobart.  By the end of the year, I knew I would burst if I tried to combine art and science any longer.  I wound up my scientific research projects and began studying illustration online, practising, attending conferences, joining local support groups, and entering competitions – a few of which I won.
In 2011, knowing my background, author Anne Morgan asked me to provide some concept illustrations for her new climate change picture book manuscript.  I embraced this as an interesting challenge, completed two drawings, went on a six-week holiday, and promptly forgot about them.  On return, I discovered that Anne’s manuscript had blossomed into a collection of nine eco-tales!  Happily, publisher IPKidz said ‘yes’ to both Anne’s book (now titled ‘The Smallest Carbon Footprint in the Land and other eco-tales’) and my illustrations, and I had about nine months to complete over thirty black and white ink drawings and a colour cover.﻿
﻿
Because the book ‘recycled’ traditional stories, both Anne and I thought it would be fun to use a retro illustration style.  I was already a fan of 1950’s and 60’s illustrators and cartoonists, including Hilary Knight (creator of Eloise), Charles M. Schulz (Snoopy), Jean-Jacques Sempe (Nicholas) and Ronald Searle (the girls of St Trinian’s).  These wonderful artists drew with spatter and flair, imbuing their characters with innocent lunacy.  In studying their work I became aware of my own limitations, but also learnt how to overcome many of them.  Family and friends became accustomed to seeing me with black stains on all the fingers of my right hand!
Anne’s book offered wonderful scope for illustration, as all of the stories contained different types of characters – canny pigs, wolves, a scruffy prince, a clueless space cadet, an angry Scot – and all of them needed to be funny to match the imaginative text.  Many times I ripped up drawings, thinking that to be consistently funny was harder than securing a scientific research grant.  By the time I finished, I felt as if my brain had been completely overhauled.  It used to be an analytical instrument geared to detecting logical inconsistencies.  Now it’s a far more flexible system, more open to emotional nuance, better able to see patterns and links between different objects and ways to combine them into a satisfying whole.

I’m delighted to have published my first book as an illustrator.  As a result of this work I am now illustrating two picture books on traditional life in Sudan (When I was a boy in Sudan, by Terry Whitebeach and Sarafino Enadio).  I would say to new illustrators: ‘Take every opportunity to develop your abilities – you never know where it will lead.’  I find illustration completely satisfying on both an intellectual and emotional level.  It’s brought me challenges and dimensions that I would never have experienced had I stayed in scientific research.  I wonder, though, if I could ever have conquered the difficulties without first having a career in science.  Although this is my first children’s book, I think it’s my 35th publication!