The Olympics, Peter Pan and a New Family Tradition - by Maureen Mann 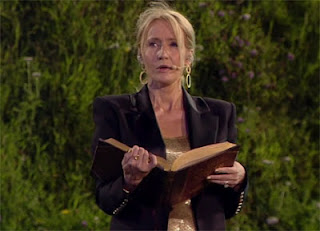 Wasn’t it great to see that children’s literature had a section in the Olympic Games Opening ceremony! The whole evening was an excellent story-telling session, presented for the world to see. Did you miss the references? There was Peter Pan (published 1911) during the scene celebrating the Great Ormond Street Hospital for children. GOSH receives royalties from any adaptation in any format (audio, stage/film, print, toys etc) of Peter Pan -- a far-sighted decision by J. M. Barrie, and of Lord Callaghan who changed the 1988Copyright Act once the first copyright expired, 50 years after Barrie’s death. In the UK, copyright fees are now in perpetuity to GOSH though this is not the case in other parts of the world.But back to the Games Opening Ceremony.

The organisers also had references to Chitty Chitty Bang Bang (written by Ian Fleming, published 1964), Mary Poppins (by P. L. Travers, published 1934) and some of the dark elements of J. K. Rowlings Harry Potter series. JKR herself read some of Peter Pan. These are perhaps not the titles which I would have chosen but they fitted in well with the rest of the performance. Did you agree with the Olympic Committee’s choices? If not, what would you have included?

On the theme of story-telling. We have recently spent 2 weeks with Gabriel, our four year old grandson, and some of the best times were sharing stories with him. Of course, we had to read his current favourite books, largely dominated by dinosaurs. Another book we had to keep returning to, and one he has recently become ‘brave’ enough to read, was Sally Grindley’s Shhh! The first time I shared it with him, about 18 months ago, he ended up a quivering mess, brought on by the threat (from the book) of the giant getting him and the final words: ‘Quick! Shut the book!’ So the book was put away until he came across it again while we were there.

Occasionally I regretted his new-found delight when I read it for the 10th or 12 time without a break. After the success of this title, we started including the concepts into our stories. There was a giant (of course) but Gabriel and several of his friends became characters, along with those from other traditional tales. Jack made a regular appearance, as did Hansel and Gretel and several versions of wicked witches.

Each of these sessions – in the car, at home before bed or breakfast or other odd times during the day – became a wonderful joint sharing time. Not only did we (as adults) put our ideas into the telling, but Gabriel had firm ideas who had to become part of the tale and how they would behave. He created a character list before we began. Of such stuff are great relationships made and oral traditions begun.
Posted by CBCA Tasmania at 18:38