Old Friends I'd Never Met: Lyndon Riggall on Why Reading The Classics Might Surprise you 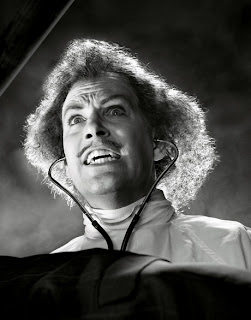 There are some books you feel that you know without reading them.

For example, I knew who Bram Stoker was, and Mary Shelley, but why should I have to read Dracula or Frankenstein? I knew those stories through symbiosis already!

But when I began a class on Science Fiction and Fantasy through the University of Michigan on free education website Coursera a few weeks ago (I know! I just don't have enough to do, do I?) I found that both Dracula and Frankenstein were on the syllabus, and so I was dragged reluctantly back to the originals.

What I didn't expect though, was that these two novels were an absolute treat. Oh sure, I knew the basic premise of each one well enough, but nothing beats the original. Both texts had such eloquence of language, and each took me by surprise. Of course I had heard that Frankenstein was the creator, not the monster, but who would have thought that there would be no green hunk of flesh in sight, nor any neckbolts? No Igor, and no lightning re-animation either, though suggestions of a bride popped up sooner than I expected!

Dracula had most of the traits I'd come to anticipate and yet some of the most striking images of the novel had nothing to do with him. Lucy Westerna's childless death stayed with me as one of the most powerful sequences of the book, as she fed on the children of the neighbourhood, who, dazed, described her only as the "booful lady." And the psychiatric patient Renfield, driven mad by his psychic link with the Count was another highlight, his desperate pleas to his doctor to be given a cat,  even as he lures insects into his cell window with sugar and eats them. Where were these indelible images in my cultural consciousness?

We've all got a pile of classics we have put off reading because we feel like we know them already, perhaps musty second-hand paperbacks we haven't opened since we picked them up at a garage sale, or that beautiful deluxe edition that someone gave you because, well, it's influential and you should get to know it. Maybe now is the time to start reading, and see if you really know them like you think you do.
Posted by CBCA Tasmania at 17:56