Review - The Fault In Our Stars, by John Green 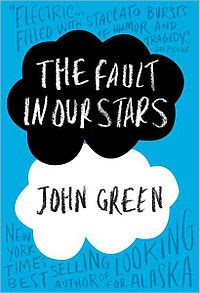 The Most Important Y.A. Novel of 2012: Lyndon on John Green's The Fault in Our Stars.

A few weeks ago I received a package from America. I was rightly ecstatic, because it came from an independent bookstore in North Carolina, and it contained - amongst other things - two books: Why We Broke Up by Daniel Handler (a man who occasionally masquerades as the unparalleled Lemony Snicket) and John Green's The Fault in Our Stars. Both had been signed in a recent author visit.

Let's leave Why We Broke Up for today, which, for the record, remains a worthy and wonderful addition to Handler's canon, and is gorgeously illustrated by Maira Kalman, who he collaborated with previously on 13 Words. Let's get back to the other book. Because I have a confession to make. Not only was this not my first copy of The Fault in Our Stars, it wasn't even my first signed copy. If you count the audiobook, which I purchased as an author-read limited edition box set (they only made a thousand copies of that one), I now had three copies of Green's latest.

So why TFiOS? (Yep, the acronym is out. Let's get heavy.)

Well, I think John Green is the best writer of Young Adult fiction alive today. When I first read Looking For Alaska I was - once the tears dried - nearly driven mad by its eloquence. John can achieve that - so often impossible - feat; he can write teen literature with intelligent characters that don't sound like adults pretending to be children. Too often Y.A. writers leave their characters lifeless and vapid in an attempt to make them sound 'street', and they become an idiotic stream of text-speak and pop-culture gags. It's a cut above but no small crime too, to go the other way, and leave your teens speaking in bizarre adult voices, like children dressing up in their parents clothes and playing their own farcical version of adulthood.

Green gets it. His characters in this novel are brutally intelligent without being ridiculous. On top of that, he's hit a killer plot as well. TFiOS is your average boy-meets-girl love story, with a crucial twist: both its main characters, the narrator Hazel Grace Lancaster and her love interest Augustus Waters, meet in a cancer survivor support group. They live on borrowed time. It takes everything you know and love about Y.A. and turns the intensity up to eleven.

There is also no denying that John's a great guy. Dismayed by the amount signed copies of his books went to desperate buyers for on the internet, he signed every single copy of the initial print run of TFiOS to even the odds - a mere 150,000 scribbles. His philanthropic work with his brother Hank as the YouTube duo VlogBrothers and the founders of 'The Foundation to Decrease WorldSuck' also leave plenty to be admired. I may come back to those on here another day.

In this book though; this remarkable, funny, heartbreaking, existentially fraught, wonderful, emotional and intelligent book, there is everything that could be hoped for from Green, or indeed any other author. I have a habit (I would suggest knack, but truthfully a habit) of announcing that a book is the next big thing, and waiting and watching as the movie rights get sold, the hype builds, the film gets made, and the book explodes into something more than words on a page in the hearts and minds of its captivated audience.

I'm calling it, folks. The Fault in Our Stars is the next big thing. Read it, borrow it, or steal it, but make sure you get a copy.