Every School Library Should Own This Book! (Patsy goes to the launch of One Small Island)

ONE SMALL ISLAND – ALISON LESTER AND CORAL TULLOCH
I was fortunate enough to attend the Hobart launch of this new book a week or so ago – I had been waiting and waiting for this for months! And now I have my signed copy!
Why was I so keen to get my hands on a copy of this book about Macquarie Island? There are a couple  of reasons. One is that, in my opinion, both author/illustrators are excellent, and we can rely on their output being of high quality. And as a member of the Tasmanian National Parks Association for some years, I have been concerned at the ‘she’ll be right, mate!’ attitude shown in the past by both federal and state government as the World Heritage Macquarie Island continued to deteriorate. The Association has kept up a postcard campaign for several years and has published articles in its newsletter in an attempt to raise the importance of the issue in public and political eyes.
Yes, I’ll admit, some problems have been addressed, but it has taken so long – an island at that latitude will not recover rapidly from the despoliation caused to its flora and fauna by species introduced by exploitative humanity.
The book itself, through the covers, the endpapers, the text, and the detailed artwork, contains material which addresses many issues relevant to Macquarie Island. Its geology, its exploitation as a source of seal and penguin oil, its history associated with Antarctic explorers, the impact of feral species on the island, and the conservation message are all there.
Every school library, whether primary or secondary, should have its copies, and every family will find it a source of information and discussion with a wide range of ages.
Congratulations to Alison and Coral for their thoughtful contribution to available material on Macquarie Island!
- Patsy Jones, President, CBCA Tasmanian Branch 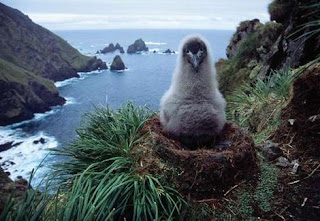