The CBCA Awards - a judge's perspective

Don’t forget: next Friday (August 19th at noon), the CBCA Book of the Year results will be announced, and Children’s Book Week will be underway. This is always a time of excitement and debate. Some people will think the judges have made exactly the right decision and others will wonder how our children’s book awards can be so wrong. And then of course there are those who stand somewhere in the middle. I wonder where you will be this year.
Literature is such a personal choice. What I adore today may not be what I really like tomorrow, because in that short time I have read something else which changes my outlook slightly. And we need to remember that the judges have read all the books submitted and make their decisions based on this. None of the rest of us has done this. The judges use very clearly stated criteria based on literary merit for their choices. But it is wonderful that there is discussion about the awards because that keeps the world of Australian children’s literature thriving.
You can find the short list on the Children’s Book Council of Australia website (http://cbca.org.au/Shortlist_2011.htm), so check it out if you haven’t already done so. And the criteria used by the judges can be found under Information for Publishers: http://cbca.org.au/userfiles/file/Downloads/Nat%20Site/2011/awards%20criteria.pdf .
I have recently been in Canada and spent time looking at some of their many awards given to children’s and young adult literature there. I chose my favourite genre of picture books and especially the Marilyn Baillie Picture Book Award, administered by the Canadian Children’s Book Centre. You can find details of all Canadian children’s books awards at http://www.bookcentre.ca/awards/canadian_awards_index. 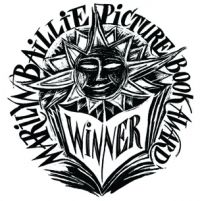 The Short List for the 2011 Marilyn Baillie Picture Book Award was announced June 14 and the winners will be named October 4. To be eligible, the book must
The prize money is $20,000. The choices are made by a panel of three children’s literature specialists. Details of the awards can be found at http://www.bookcentre.ca/awards/marilyn_baillie_picture_book_award
And here are the shortlisted books:
I Know Here
Written by Laurel Croza, illustrated by Matt James 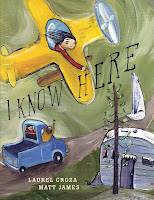 Groundwood Books, for ages 5-7
A young girl (first person narration) learns that her family is to move from her known rural environment to Toronto with all the worries and fears that going into the unknown produces. She shows the reader all her favourite places full of great memories, comparing the certainty of now with the uncertainty of the future. As adult readers we understand that her family are itinerant workers and this would lead to some great discussions with child readers. The illustrations are child-like and there’s good use of whitespace on the page. The endpaper maps would help all readers, but especially those from outside Canada.
In Front of My House 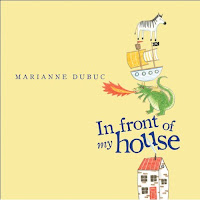 Written and illustrated by Marianne Dubuc. Translated by Yvette Ghione
Kids Can Press, for ages 3-7.
This circular story reflects the imagination of a child who starts by looking at her immediate environment but quickly expanding into a broader journey, the whimsical and the improbable but eventually coming home again. The format remains constant throughout the book. The right hand page includes a positional phrase. Turn the page and on the left an object is named and is illustrated opposite, with the next positional phrase below it. There is wonderful use of white space, with plenty of scope for young imaginations to create their own environment.
Singing Away the Dark 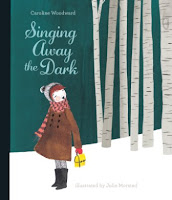 Written by Caroline Woodward, illustrated by Julie Morstad
Simply Read Books, for ages 4-8
The child narrator starts her song with the words, “When I was six and went to school, I walked a long, long way …” and then takes us on her journey through the dark and snowy woods to catch the bus. For most Australian children this winter journey is outside their experience but many will understand the worries of being alone and the fear of getting lost. This is another book with great use of white space which rests the eyes but also represents the wintry journey. 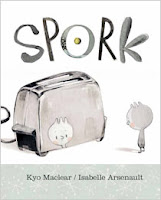 Spork written by Kyo Maclear, illustrated by Isabelle Arsenault
Kids Can Press, for ages 3-8
Spork is the child of a spoon and a fork and doesn’t quite have any of the advantages of either of his parents. He doesn’t fit in with either the various shaped forks nor the spoons, until one day a messy thing arrives and Spork is exactly what is wanted. This book is a celebration of difference and the need to fit in. I am not a great fan of anthropomorphism but in this story it works and the humour in both verbal and visual texts adds to the finished product. 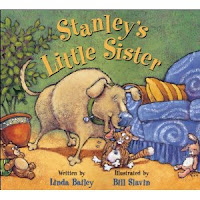 Stanley’s Little Sister written by Linda Bailey, illustrated by Bill Slavin
Kids Can Press, for ages 3-7
This is the most recent of the Stanley series. When a new kitten comes into Stanley’s house, his nose is put out of joint but he tries to make friends. He hasn’t yet learned how to behave around this new sibling. Through trial and error, creating mayhem and annoying his people in the process, Stanley finally gives up trying so hard. The result is friendship and acceptance. Children will enjoy the humour in illustrations and words. For me, though, some pictures are too dark and the text placement isn’t as successful as it could be.
So which is my favourite? At the moment I’m wavering between I Know Here and In Front of My House. My three year old grandson much prefers In Front of My House with its whimsy and outlandish inclusions. I wonder what the judges will choose. Much like I wonder which will be winners in the CBCA Book of the Year Awards. We’ll soon know.
Have you read any of the books on the Canadian shortlist? Do you think major book awards lead to international recognition?
What do you think of the CBCA Awards? Do they have their finger on the pulse of great contemporary Australian literature?
And, finally, what do YOU think of THIS year's list? What will win? What SHOULD win? And which books SHOULD have been on the list?
Posted by CBCA Tasmania at 16:58