The Benefits of Shadows: Thoughts on the SUN Shadow Judging Program

Lyndon Riggall, a Senior Secondary English teacher in Tasmania, was eager to facilitate a group of keen students in the Shadow Judging process and shares his insights into this new CBCA initiative.

I am sitting with a small group of students watching a live stream from John Marsden’s remarkable Candlebark School in Victoria. Jay Laga'aia is on the screen, and we are waiting patiently for him to announce the Older Readers Book of the Year. Things are a little different this time, though. Firstly, the Older Readers Book of the Year has already been announced. We learnt what it was a week ago. Secondly, my students are especially invested in the outcome… after all, in this case they have helped decide it.

I talk, of course, of the SUN Project’s Shadow Judging Program, which began this year. Alongside creative components and author visits, the goal of Shadow Judging was to create a separate set of “Shadowers’ Choice” awards, chosen by students of appropriate age groups from across the country. I am extremely excited about this concept. When I was in Grade 10 and was asked to design and undertake an independent project, I had a pretty radical idea (in hindsight, I’m lucky that my teacher didn’t take the whole thing as a personal insult). I went to the school library and collected a stack of novels covering different genres, authors and styles. Then, I showed these books to group of staff and students, asking them which they thought the children of the school would like the best. The lists I composed at the end of my project were almost direct opposites. It turned out that when it comes to deciding what to read, even adults looking for books that will appeal to children sometimes see things with vastly different eyes to the children themselves. It came as no surprise, then, that I also saw very diverse points of view expressed in the Shadow Judges’ final decision-making.

I’m not suggesting, of course, that we throw away the traditional CBCA awards altogether and let young people entirely run the show. Award-winning books in these categories are selected based on their literary merit rather than simple appeal to readers, and that is as it should be when we consider the legacy that is being made by the council long-term. That said, when the shadow judging teams made vastly different decisions to the adults even when using quite similar criteria, it solidified in my mind an unshakeable belief that our children and adolescents see the world with different eyes… the only way to truly be sure what connects with them in the world of reading is to take notice and ask them.

My group of shadow judges found How to Repaint a Life by Stephen Herrick to be the novel that most resonated with them from the Older Readers category. The Children’s Book Council found Tiger Daughter by Rebecca Lim to be the book with the highest level of literary merit. In general, the Shadow Judges from across the country selected Sugar Town Queens by Malla Nunn as the strongest title on the shortlist. It seems there is no hope of getting a clear answer. But should this significant discrepancy bother us? I don’t think so. The Shadow Judging Process does two wonderful things: it reminds us that readers are different (and that no single judging decision in an instance like this is by default the right one), and it promotes discussion, debate and further reading. These are—to me at least—objectively positive outcomes.

When I asked the classes at the school where I work whether anyone might be interested in being involved in the Shadow Judging project, the response was enthusiastic. “I love judging people!” one student immediately declared. My judges have been learning—as I once did when I was a CBCA judge a decade ago—the joys and sorrows of the judging process. It is awful and frustrating to see books that you love fall to the wayside of group consensus, but it is wonderful to be part of the process of picking a winner: to see a text celebrated, shared and appreciated in a way that might otherwise never have been possible for it. The Shadow Judging program empowers young people to have autonomy in their decision-making and brings more attention to books. As I watched my students collaborate, share, consider, create, and get excited about individual novels, I saw a culture of reading grow. Many of them are still passionate about individual titles and are pushing these books onto their friends and classmates. Shadow Judging is creating something special. 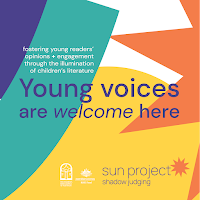 I suspect that my students will be back next year, but in the meantime we’ve got even more wonderful books to read and celebrate than we have ever had before…

That, for me, is the greatest win of all.

Lyndon Riggall is a writer and teacher from Launceston. With Graeme Whittle he created the picture book Becoming Ellie, and he has recently collaborated with Grace Roberts on Tamar the Thief, which is available to read for free on the Tamar Valley Writers Festival website. Lyndon can be found at http://lyndonriggall.com and on Twitter @lyndonriggall.

Editor’s note: Further details on the winning titles in the Shadow Judging and links to the creative responses to these books can be found on the CBCA website under Shadow Judging.

Email ThisBlogThis!Share to TwitterShare to FacebookShare to Pinterest
Labels: Book of the Year Awards, CBCA