Pets often star in children’s books, and this list of excellent titles are all about dogs. Thanks to Maureen Mann for this terrific range of picture books to explore and revisit.

This list could be hundreds of titles long, but I am going to focus on some of my favourites. But I’m not sure I’ll know when to stop 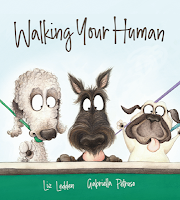 Walking Your Human by Liz Ledden and Gabriella Petrusa (2021)
This light-hearted look at the differences between what a dog and person thinks about what makes a good walk. People get distracted by nearly everything they see. Dogs think their humans need protecting and that they enjoy running and having their arms stretched. Young readers will love the various characters of dogs portrayed but adults will delight in the power that our four-legged family members have over us. 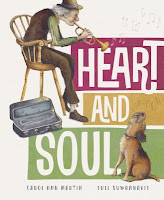 Pig the Pug by Aaron Blabey (2014), and all the later Pig adventures. Pig is such a greedy dog and has to learn to share with Trevor the dachshund. Much of Blabey’s success comes from the very expressive facial expressions he creates for all his characters.

My Friend Fred by Frances Watts (2019).
Fred the dachshund has to learn friendship, tolerance, and difference to become best friends with his feline companion and the story’s narrator. Great use of white space, an engaging text and endpapers which have obviously been part of the design process not just to hold the book together.

Three by Stephen Michael King (2019).
A wonderful story of a three-legged dog who isn’t fazed by his handicap and who finds new love, friendship and adventures in the countryside with his friend Fern. 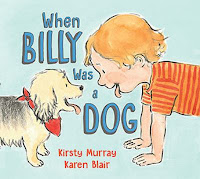 When Billy was a Dog by Kirsty Murray and Karen Blair (2019). Billy begs and begs to have a dog. He’ll look after it and do everything necessary. But when his dog doesn’t come to the house, Billy becomes the dog he wants, with frequent humorous results and responses. 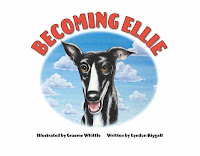 Becoming Ellie by Lyndon Riggall and Graeme Whittle (2019).
Ellie is given a name and identity when she is adopted after her career as a racing greyhound is ended by injury. The layout of the book reflects the chaotic shape of Ellie’s life and Whittle’s water-colour illustrations show his empathy to the dog. 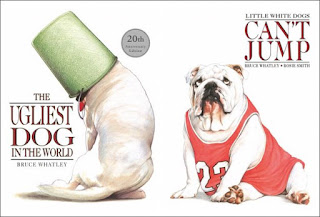 The ugliest dog is a boxer but is he really ugly or is beauty in the eyes of the beholder? It would seem so. As a pug, or maybe a bulldog, Smudge’s legs are too short to get into the car and the family has to solve the problem.

My Dog by John Heffernan and Andrew Mclean (2001). This powerful picture book for more mature readers looks at the devastation of war and ethnic cleansing. 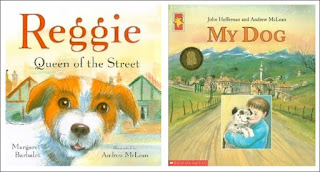 Reggie Queen of the Street by Margaret Barbalet and Andrew McLean (2003). Reggie has everything worked out on her street until Helen and Doug decide to move to the country where Reggie is unhappy. She returns, alone, to the city where everything has changed so he travels back to her humans. There she learns to fit in with all locals. 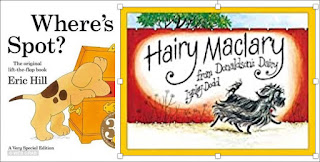 And we mustn’t forget all the Spot and Hairy Maclary titles. I

must stop but I have hardly tapped the wealth of stories about man’s best friend.

Which of your favourites have I missed?

Email ThisBlogThis!Share to TwitterShare to FacebookShare to Pinterest
Labels: reviews